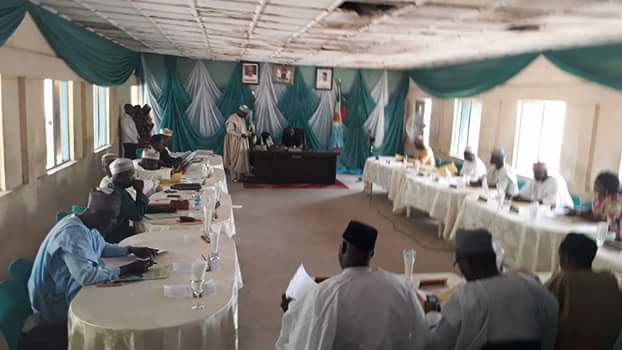 The Adamawa state Government is to  procure Twenty Thousand Metric Tons of assorted fertilizer to farmers for the year 2017 farming season.

This was contained in a  resolutions  reached during the  8th  State Executive Council meeting and the second  held  out side  the Council Chambers of the Government House Yola in 2017  which  was presided over by Governor Muhammed Umar Jibrilla  at Government Day Secondary School Demsa, Demsa LGA.

Briefing Journalists on the outcome of the EXCO Meeting, The Honourable Commissioner Ministry of Information and Strategy Comrade Ahmad Ibrahim Sajoh along side Chief of staff government house Alhaji AbdurRahman Abba Jimeta and the Honourable Commissioner for Local government Affairs Alhaji Mustapha Barkindo and State Attorney -General and  Commissioner for Justice Barr.Bala Silas Sanga explained that the Council has resolved  in conjunction with the Ministries of Agriculture and Local Government Affairs would  procure Twenty Thousand Metric Tons of assorted fertilizer to farmers of Adamawa state for the year 2017 farming season and to be subsidised at the rate of N6,500 (Six Thousand, Five Hundred Naira Only).

According to the Information Commissioner, the Council had decided to reactivate and resuscitate  all the Technical Skills Acquisition Centres across the state in order to tackle the problem of  youths  restiveness  and unemployment, pointing out that the Council  viewed it necessary to  revisit the  centres so as to make the centres  very effective and  functional once again.

He explained that  a committee  was constituted headed by Governor Muhammed Jibrilla  as the Chairman, the Chief of staff Alhaji AbdurRahman Abba Jimeta  - Vice Chairman and  Commissioners of Information and Strategy Comrade Ahmad Ibrahim Sajoh, Local Government Affairs Alhaji Mustapha Barkindo, the Focal Person and Senior Special Assistant  on Federal Government  Intervention Programme Commodore Sali Bodes as members and the  Special Adviser on Poverty Alleviation and Wealth Creation Alhaji Ayuba Audu as the Secretary of the committee .

The Council also earmarked the sum of One Billion Naira to  be injected  to settle pension arrears  for the state  Pensioners, Sajoh also explained that the  payment of  arrears would  starts by Tuesday  next week, stressing that  already a committee  headed by the  Commissioner of  Finance and Budget Mahmood Sali Yunusa is to look into the problems of  pension  to clean up the  Data and starts  payment  to eligible Pensioners in the state.

However, Governor Muhammed Umar Jibrilla  also  paid a courtesy visit on the  Hama Bata His Royal Highness  Homun Alhamdu Gladson Teneke at his palace where he assured the Royal father that the state government  has proposed to  construct Earth Dam  at Kukumto in Nassarawo Demsa.

The Governor also solicited for the support and cooperation of the people of Demsa  to the present administration for the overall development of the state, and urged the people to always  live in peace and harmony with One another, describing Bata people  as peace  loving  community.

The  Principal of the Government Day Secondary School Demsa  Mr, Michael Ngaro also conducted  the Governor and Members of the State Executive Council  round the school premises where Governor Muhammed Jibrilla explained that his government has declared a state of emergency on Educational sector in Adamawa  and GDSS Demsa would be giving a new face lift.