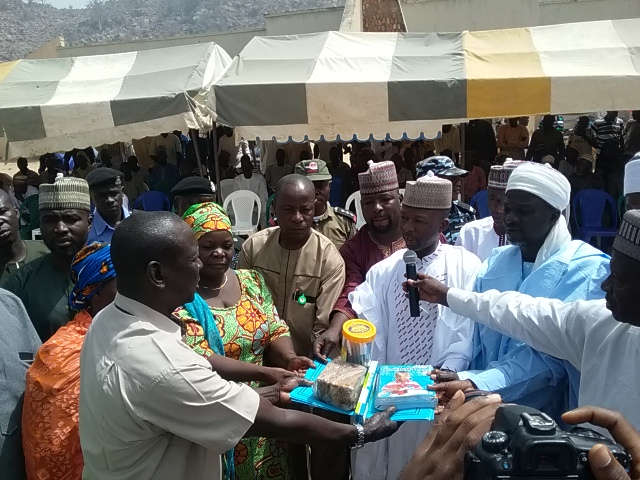 As the world is busy  celebrating  Valentine's day, His Excellency the Executive Governor of Adamawa State, Senator Mohammed Umaru Jibrilla, Sardaunan Mubi, demonstrates his love and care to the people of Madagali Local Government Area. He distributed learning materials  worth millions of Naira to (84) eighty four public Schools.

The Honourable Commissioner of Education Professor Kaletapwa George Farauta while distributing the items which included books, pens, pencils, rules, chalk and dusters through the Director Quality Assurance of the Ministry, Mrs. Nancy  Ahmadu, told the gathering that the distribution of the items is in accordance with the state of emergency declared by the Governor. She reiterate that the flag off is to mark the beginning of good things to happen in the entire sector.

Receiving the items, the Executive  Chairman of the  Local Government Council, Honourable  Yusuf Mohammed expressed his gratitude to His Excellency for Choosing his Local Government to be among the  first beneficiaries of the programme. He however  cautioned the teachers to use the items for the purpose they are made for as any teacher found wanting will be delt with according to the civil service rules.

Responding, the Coordinating Principal Mallam Umaru Isah, who spoke on behalf of his colleagues appreciated the Governor and promised to take education to the next level, as they have no more excuses.

The event ended with traditional dance where the Executive Chairman participated to express his happiness.