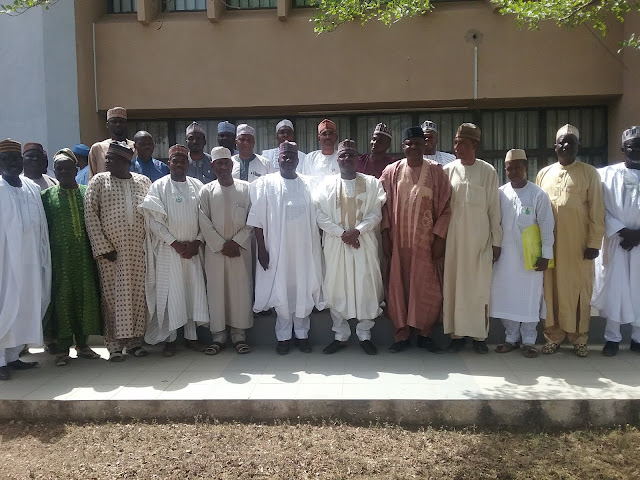 Governor Muhammed Umar Jibrilla has  Donated  the Sum of  Ten Million Naira to the Prestigious Ahmadu Bello University  (ABU) Zaria Alumni  for the uplifting  of the Alma-mater.

The Governor made the  Donation  through the  Commissioner of Information and Strategy Comrade Ahmad Ibrahim Sajoh when Members of the Alumni led by its National President Dr. Ahmed Tijjani  Mora paid a courtesy call on Governor Muhammed Umar Jibrilla at Government House Yola.

Governor Muhammed Jibrilla  described  Education as the bedrock of development for any nation, explaining that no Development  can be achieved with out education, stressing that his government had already  declared a state of emergency on Education sector in the state .

While  thanking Members of the ABU  Zaria for identifying with his administration, he described ABU as a citidal of learning .

Governor  Jibrilla commended President Muhammadu Buhari for his efforts in maintaining peace and security in the North East sub-region which  have  experienced insurgency.

He described Adamawa state as a mini Nigeria with over Eighty -Seven Ethnic groups and diverse  cultural inclinations.

He said the names of Late Sarnau na Sokoto Sir Ahmadu Bello  will ever be  remembered in view of his patrotism and purposeful leadership to the unity and development of the Northern region.

In his remarks the National President of the Ahmadu Bello University Zaria Alumni Association  Dr.Ahmed Tijjani Mora  had informed  Governor Muhammed Jibrilla that the Alumni was at Government House to congratulate  him as a  Governor of Adamawa state and commended the Governor for his outstanding performance in rebuilding Adamawa state.

He said primary objectives of association is to promote the  welfare of the  students and to maintain the  prestige  of the  University as well as unity and  cooperation of its members across the  globe.

He also presented  some of the  publications of the Alumni and  sovenier  to Governor Jibrilla  as a mark of respect  and excellence to the  Governor.

Earlier in his remarks the Honourable Commissioner Ministry of Information and Strategy Comrade Ahmad Ibrahim Sajoh MNIPR had enumerated some of the remarkable achievements recorded by the present administration under Governor Muhammed Umar Jibrilla for the past Twenty One Months  in  office  which includes construction of roads infrastructure, Education, Health Care delivery ,Agriculture, Youth empowerment as well as  maintaining peace and security across the state.

According to Comrade Ahmad Sajoh the state  had witnessed unexpected renewal under Governor Bindow  and policy direction of government .