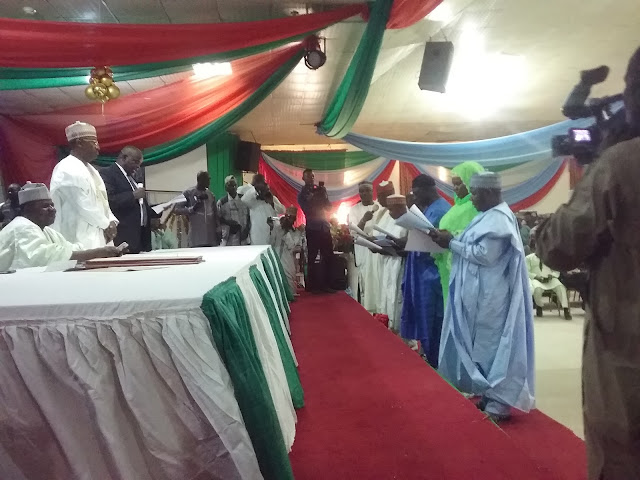 Governor Muhammed Umar Jibrilla says  Transparency and Accountability are the cardinals principles of his administration.

The Governor stated this while presiding over the swearing in Ceremony of Six Newly appointed Permanent Secretaries at Banquet Hall of the Government House Yola.

Governor Muhammed  Jibrilla described  Civil Servants as  the bedrock of development and custodians of system  in government.

He advised the  newly sworn in Permanent Secretaries to join  hands with  their respective  Honourable Commissioners in their  Ministries, Boards and Parastatals  so as to move the state forward.

The Governor also  reminded  the appointees to  always  abide by the oath of office taken while  performing  their  official responsibilities.

Responding on behalf of the Permanent Secretaries, Mr. Danladi Patrick  Kwabe  thanked  Governor Muhammed Umar Jibrilla for  counting  them  worthy  to serve in this capacity in  his  administration. He assured that  they will work together  with their  Commissioners  in implementing  all the  policies and programmes of  government.

The  Oath of office was administered by the State  Solicitor General and Permanent Secretary Ministry for Justice Barrister Suleiman Muhammed.