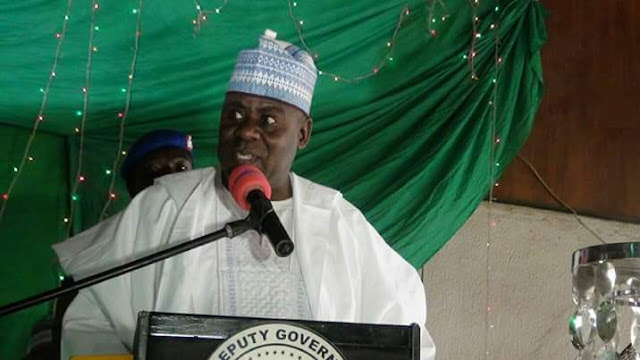 Deputy Governor Martins has reiterated Government's determination to increase the budgetary allocation to the Agricultural sector.He made this known when Flag off of Oxfam input and equipment to small farmers in collaboration with Adamawa state Government held at Adamawa Agricultural Development Programme, Yola Town Thursday.

Babale explain that partnering with Oxfam will enable the State Government deliver its mandate of providing good governance to the people adding that the State Government is intervening in reaching out to over twenty thousand 20,000 Households with fertilizers, water pumping machines, improved seedlings, grains banks and economic trees under the village savings loads scheme.

He also said their intention is to enhance reilient Small Scale Agricultural practices adding that the State Government in partnership with Oxfam, European Union will also distribute four hundred  400 water pumps and four thousand eight hundred 4,800 bags of fertilizers to dry season farmers in Fufore and Guyuk Local Government Areas. He assured that the mode of payment  is made flexible so that none of the targeted Households are excluded due to lack of cash stressing that State Government is determined to ensure food security in the state.  he called on the benefiting farmers to use the items for the right purpose rather than selling them.

Also in his speech, the Commissioner of Agricultural Alhaji, Ahmadu Waziri who was represented by the Permanent Secretary in the Ministry Mrs Felicia commended Oxfam for the gesture reiterated the Ministry in supporting farmers to enhance food security in the state.

On the other hand, the Country Representatives of Oxfam Mr Sabastine Shikel in a welcome speech said Oxfam is determined to support four 4 Local Governments to include Guyuk, Fufore, Song, and Yola starting with Guyuk and Fufore. He notes that Oxfam believe in humanitarian service to the people and they are targeting twenty 20 Household in dry season farming calling on State Government to give more priorities to Agricultural Sector.