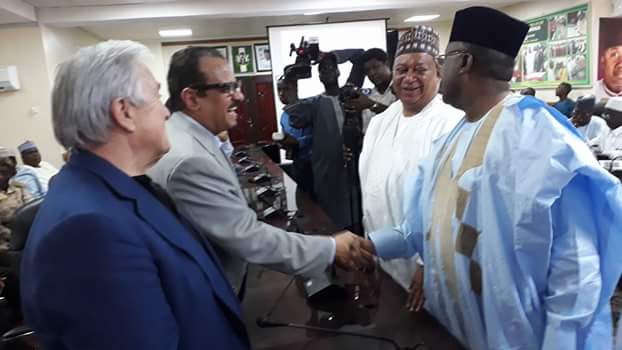 The Secretary General of the Organisation  of Petroleum Exporting Countries OPEC  Dr.Muhammad Sanusi Barkindo have commended Governor Muhammed Umar Jibrilla for  taking  a bold steps towards  transforming Adamawa state into a city.

The OPEC  Secretary General  made the commendation when he led a delegation of the Organisation for the first time  since his assumption into  office as the Secretary General of World Oil apex body to a courtesy visit on Governor Muhammed Umar Jibrilla  at Government House Yola.

Dr.Sanusi Barkindo says that  he nearly get lost  when he arrived Yola the Adamawa state Capital  and described the  work done by Governor Muhammed Jibrilla  as a  selfless service to the entire people of Adamawa state.

He called on the Adamawa Elites to  rally round Governor Jibrilla  and to shun any political  differences so as to move Adamawa state forward.

In his  response, Governor Muhammed Umar Jibrilla thanked Dr Muhammad Sanusi Barkindo  and his entourage for the  visit and assured that  social transformation in Adamawa state was just started by the present government.

The Governor said that the  state is calm and stable and  called on the  investors to come and invest in the state, assuring that  protection of lives and properties is the top most priority of his administration.

While congratulating the OPEC Secretary General over his well  deserved appointment, the Governor also  promised to give him all the necessary support and cooperation in order to succeed and to move the World body  forward.

Earlier in his presentation  to the  visiting OPEC delegation, the Honourable Commissioner ministry of Information and Strategy Comrade Ahmad Ibrahim Sajoh MNIPR  highlighted  some of the remarkable achievements recorded by the present administration under Governor Muhammed Umar Jibrilla which includes Roads infrastructure, provision of Quality Health care services, Provision of Agricultural implements,Declaration of  state of emergency on Educational sector, Youth empowerment among others.

According to Comrade Ahmad Sajoh, the  present administration under Governor Muhammed Umar Jibrilla had constructed standard world class of One Hundred and Thirty  (130) roads in Twenty - One Months  and maintaining of peace and security to the  entire  state.