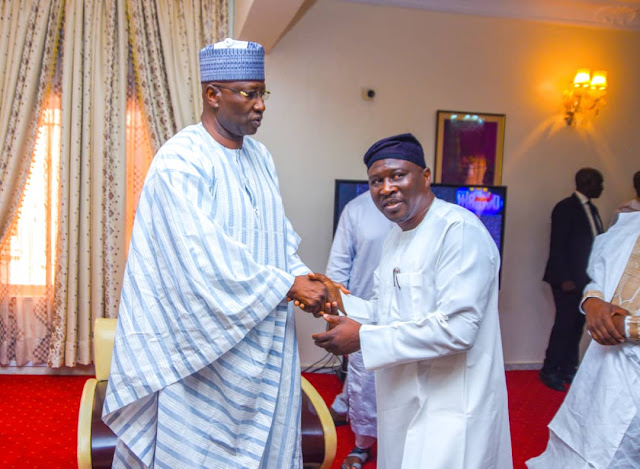 The President of the Federal Republic of Nigeria, Muhammadu Buhari and the Governors of Taraba and Sokoto States Architect Darius Ishaku and Alh. Aminu Waziri Tambuwal respectively joined thousands of sympathizers in Government House Yola to commiserate with Governor Ahmadu Umaru Fintiri of Adamawa State over the demise of his father, late Pa Umaru Badami.

President Buhari who was represented by the Secretary to Government of the Federation , Barr. Boss Gida Mustapha led a powerful delegation of the Federal Government.

The President described late Pa Umaru Badami as a community leader who helped people in many ways and someone who gallantly served Nigeria diligently. Stressing that his death is a loss to the entire country.

President Buhari prayed to God to give the people of Adamawa State and the family of the decease the fortitude to bear the irreparable loss. 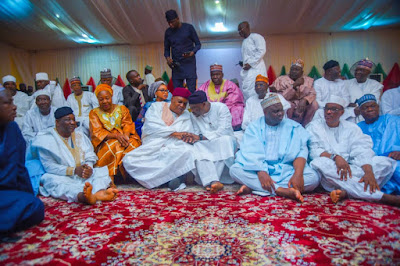 Governor Darius Ishaku accompanied by his wife, Mrs. Ana Darius and top Government Officials of Taraba State condoled Governor Fintiri and the people of Adamawa State. Arch. Ishaku explained that Adamawa and Taraba are brothers and what ever happened to one it affected the other. Adding that late Pa Badami is a father to all and his death is a loss to Taraba and Adamawa State. The Governor prayed to God to grant the soul of the decease eternal rest. 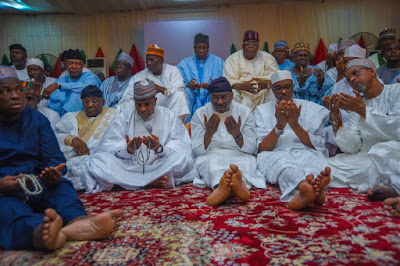 While the Governor of Sokoto State, Alh. Aminu Waziri Tambuwal led the delegation of the State to condole Governor Fintiri and the entire people of Adamawa State. Governor Tambuwal prayed to God to grant the decease Aljanattul Fitdausi.

The Royal Majesties prayed to God to give Governor Fintiri, his family and people of the State the heart to bear the irreparable loss. 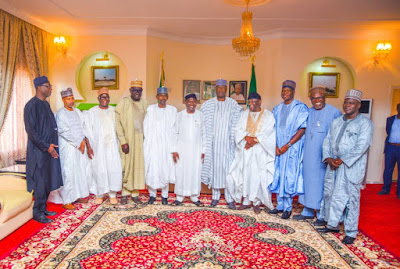 Meanwhile, a three-day special Fiddau prayer was observed in respect of late Pa Umaru Badami at the Banquet House Yola in which special prayers were offered for the repose of the decease.
The prayer was attended by top Government officials in the state among them are SSG Adamawa State Ahmed Bashir, Head of Service Government House Yola Prof. Maxwell Gidado SAN, politicians, faith based groups, civil society groups among others.
02:39
Adamawa Daily Reports
news update
Email ThisBlogThis!Share to TwitterShare to Facebook