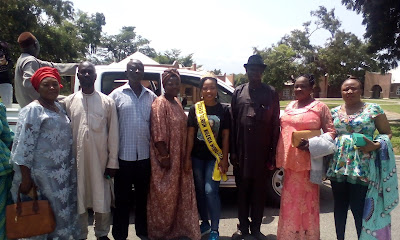 "A Better Future for All" is the theme for this year's World Tourism Day. The Day is a Celebration
that comes every year in September.This year, India will be hosting the World Tourism Day. However,
Jobs in Tourism are being required because it must reflect and incorporate ongoing advances
in the technology.

Last year, the current Queen of Tourism, incorporated the State Ministry of Culture and Tourism and a visit to
Kiri Dam was  embarked upon.

This year, the Ministry having missed out in  the National Day which was held in Edo has however held a
Mini Day at  Yankari Game Reserve in Bauchi State where the Queen of Tourism was incorporated. The team
comprising of the Permanent Secretary Ministry of Culture and Tourism, Mr Adamu Titus,  Deputy Permanent
Secretary Art Council Mrs Saso A  Benson, some Directors from the Ministry and some staff from  both Art
Council and the Ministry.

However, the team before leaving the State were administered some vaccines for yellow fever as there was a
reportof an out break of yellow fever in the Reserve. The events of the celebration kicked started with a Tour
on the reserve as rangers took the team into the jungle. The reserve arching about over 2,244 square
kilometers (866 sq mi) thousands and boarding with 3 other States.

According to history, the Game Reserve was created in 1956 and later became a National park in 1991.
There are approximately about 350 different residents of birds and other migrating birds in the reserve.
The animals are kept in free space and there  are no actual number of the animals, however there are Vet.
Doctors who comes around to check on some wounded animals. The rangers also know when a certain
spices of animals are increasing or decreasing. More so, an  investigation will be carried out as to why this
is happening in other to proffer solutions.

There is a river called Gagi where the animals come and lick the sand on the bank of the river as it contains salt
which is medicinal to them. There are also shy animals and bold animals. The shy ones would run away upon
sighting people.On the other hand, there are plenty of wells ,river, spring and  variety of flora and fauna.

There are also different spices of Monkeys, some are even bold to collect bags and other items from people in
search for food while some even dare to come close to people who are offering food item to  them. The team
also had an encounter with some as they dared to enter rooms and make way with food items.

The World Tourism Day ended with Mrs Saso leading the female member of the team to the Wikki Spring for a swim.
Attachments area
09:51
adamawadailyreport@gmail.com
News
Email ThisBlogThis!Share to TwitterShare to Facebook