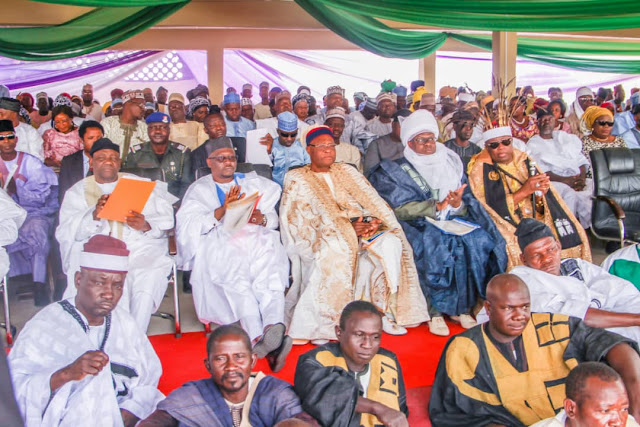 Governor Ahmadu Umaru Fintiri has charged traditional title holder to take it as a responsivity to take care of the out of school children in order to prevent them from becoming another Boko Haram in future.
The Governor stated this at the 10th Anniversary -8th February 2010 to 8th February 2020- of the 55th Hama Batta, His Royal Majesty, Hamon Alhamdu Glandstone Teneke JP, MFR celebrated at his palace in Demsa, Demsa Local Government Area.
While thanking the celebrant the 55th Hama Batta for bringing development to his chiefdom in the last ten years of his ruling, Governor Fintiri urge the sons of the Batta Chiefdom who were turban tp see that not an opportunity but a challenge. Adding that the title holders should see that the chiefdom benefit from their wealth of experience which they gathered over the years through their service in their various endeavours.
“Use the wealth of experience you gathered to add value to the people of Batta Chiefdom especially in the area of security, education and human development to the children of the poor particularly the out of school children as a result of the avoidable community crises that were experienced in the past which has forced people within their communities into formal and informal Internally Displaced Persons camps”. Governor Fintiri stated.
“I urge that we have responsibility over the children so that we avert another Boko Haram in the future”.
The number citizen of Adamawa call on all and sundry to join hand with his young and dynamic government, particularly in making Adamawa great again.
The Chief celebrant, the 55th Hama Batta His Royal Majesty Humon Alhamdu Gladstone Teneke (Diyoshifoto, Tikolo Batta, Kpangashye) thanked Governor Ahmadu Umaru Fintiri for his immense support and effort which contributed to the peaceful atmosphere that enabled the chiefdom to mark his 10th year anniversary.
The monarch stated that during his ten years as the Hama Batta, the Chiefdom has had its taste of the good, the bad and the ugly. But the most challenging is ecurity. He however said peace is regaining not only in his chiefdom but also in their sister communities and chiefdoms around.
While stating the plight  of his people during the peak of incessant attacks on their land by allege Fulani herdsmen, the higher chief explained that the attack led to lost of lives of his subjects, their farm land, houses and destruction of their economic activities. He noted that the repercussion of the attack were hunger, poverty, insecurity, disunity, suspicion, psychological trauma and kidnapping.
HRM Humon Alhamdu Gladstone Teneke lauded the security architecture of Governor Ahmadu Umaru Fintiri which he described it effective. Noting that security and peaceful co-existence were regained in the Chiefdom around the middle of the year 2019.
Remarkable among the achievement within ten years of His Royal Majesty on throne he stated: are the citing of Lutheran  church of Christ in Nigeria University in the Chiefdom, a proposal for a Private University by ECWA and a modern agricultural project by a private company that will take effect this year. Stating it will help immensely in creating jobs, eradicating hunger and poverty in the land.
Other achievements are: the ancient palace at old Demsa got a face-lift. In addition, nine additional village areas (Gillah, Ntali, Biyele, Kwale, Wuro Bakumbo, Wuro Hammanfali, Dem, Bomnia and Nasarawo Demsa South) were created to boost people’s sense of belonging and development. Education is accorded great priority and is even boosted with scholarship. Agriculture, especially dry season farming is fast becoming the mainstay of the people in addition to their traditional fishing culture.
HRM Humon Alhamdu Gladstone congratulates all their illustrious sons who were conferred with title and charge them to take the chiefdom to an enviable height once again.
The Chairman of the occasion, Chief Timawus Mathias (Nzobyata-Hama Bachama)described the 55th Hama Batta His Royal Majesty Humon Alhamdu Gladstone Teneke as a man of kindness. Stating that “His kindness of king has offered Demsa as a home to an impressive growth of humanity engaged in peaceful pursuit of the wealth of the land”.
Chief Mathias recall the long sustaining cordial relations between Batta Chiefdom and Bachama Kingdom, champion by the two kings which he also described as a unique oneness. It was a result of the peace the two kings promoted which he said is paramount to the peace of the entire Numan Federation.
He noted with applaud the economic growth of Demsa under the 55th Hama Batta which turned Demsa market to be a regular one as opposed to just Fridays only as was known. Stressing that it was the style of leadership of the 55th Hama Batta resulted to the development.
“When the righteous are in authority,  the people rejoice” quoted by Chief Mathias.
Highlight of the anniversary was presentation of Honorary Royal Awards of Peace Building to  Chief Yedisihno Ismail Murey Kpalagbe Bachama and for Agricultural Investment to Abdullahi Bashir Haske, Ciroma Ganye, Mmirini Ezorroha of Igbo land.
Also was turbanning of Comrade Rodney Sudan Nathan as Ngra Batta; Comrade Jeremiah Nemuel Ngyakwar as Ndkuso Batta; and traditional dance match pass by different cultural troupes in Numan Federation.
The anniversary was graced by top government functionaries traditional rulers from and outside Adamawa State.