Home » » Unlabelled » Lunguda-Waja Clash: Gov Fintiri Inaugurates Special Admin Panel, Charges them to do Their Job Without Fear or Favour.

Lunguda-Waja Clash: Gov Fintiri Inaugurates Special Admin Panel, Charges them to do Their Job Without Fear or Favour. 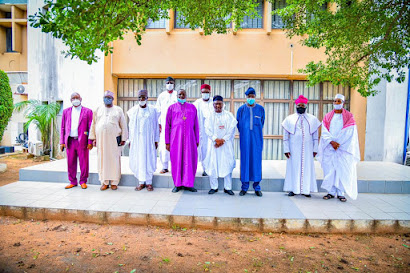 The Governor charged the panel to do their job without fear or favour or sparing any sacred cow.

Performing the inauguration Wednesday at the Council Chambers, Government House Yola, Governor Fintiri said he was saddened that at the threshold of the 21st century while the rest of the World is moving faster than was imagined, the state remained backward.

He assured that his administration will give courage and a willingness to depart from the ways of the past, adding that if it is to do for the state what other communities have succeeded in doing; to rebuild, as they did, after a series of devastating conflicts, unity across old divisions and a State characterized by peace, cooperation, economic progress and the rule of law.

"Unfortunately, over the years, as a result of violent extremism, rigorous approaches to peace and conflict resolutions have been adopted, but it does seem peace has eluded us", Governor Fintiri said.

"There seems to be a perceived disconnect between efforts and the realities on ground- and the Lunguda-Waja crisis is one of such.

"What could have happened that these neighbours that have lived together over the years now take up arms against each other?

"The cycle of conflicts and crisis we face today in Nigeria have deepened the frustration that despite several attempts at peace-building, it is evident that Nigeria has remained one of the conflict ridden areas in the World.

"I therefore challenge you as men of Honour so chosen because of your antecedents in your different fields of calling, to let us begin with energy and hope, with faith and discipline, and let us work until our work is done" Governor Fintiri lamented.

The term of reference given to the committee are to investigate and identify remote and immediate causes of clashes between Lunguda and Waja communities,  identify persons or group of persons involved directly or indirectly in the conflict, identify the extend of destruction of lives and properties and where possible identify the culprits and investigate to find whether the person responsible for the lost of lives and properties and injured had been identify and handed to constituted authorities.