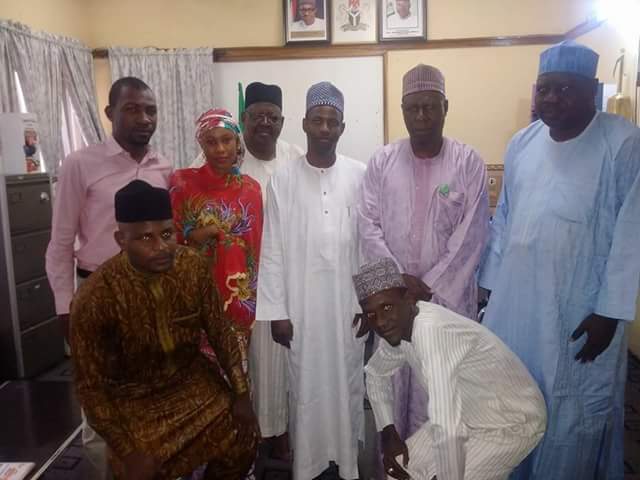 Comrade Sajoh who is a Patron of the Organisation told the visiting Executives that the concern of the Muhammad Umar Jibrilla led Government is to ensure that Democracy is well entrenched in Adamawa State. He told the group that as a credible Non-Governmental Organisation, the State Government expects a lot from them especially in the area of providing credible information that will guide the Governance process in Adamawa State.

Earlier, the leader of the group who is the State Coordinator of the Organisation Alfa M. Umar said they were in the Commissioner's office to congratulate him and identify with the sterling qualities he had displayed within just a few weeks in office as the Commissioner for Information in Adamawa State. They cited the establishment of a Blog and the increased visibility of the Government in the Social Media as some of the manifest achievements of Comrade Sajoh within just one month in office.

The Group promised to forward a proposal for a Conference on Democracy and Development which they expect the Ministry of Information to support. Other Members who accompanied the Coordinator include Fateemah Muhammed the Assistant State Coordinator, Umar Baba Ahmed the Secretary-General, Yusuf Umar, Umar Aliyu and Ibrahim M. Jada among others.

The Commissioner was supported by the Permanent Secretary in the Ministry Prince Fenny Fwa and the Director Information Mr. Sam Leneke.
01:14
Adamawa Daily Reports
News
Email ThisBlogThis!Share to TwitterShare to Facebook