NEWS:Gov Fintiri Swears in 34 Special Advisers, Board Chairs and Members 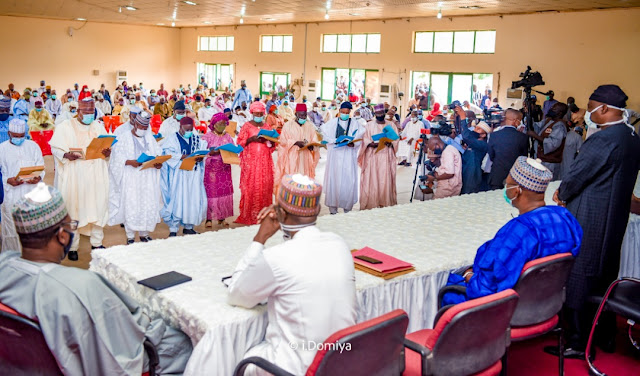 The ATM Governor equally sworn in four Board Chairmen and their members which include Adamawa State Planning Commission, Universal Basic Education Board, Adamawa Primary Health Care Development Agency and Hospital Service Management Board.

Delivering his speech at the ceremony, Governor Ahmadu Umaru Fintiri reminds the newly sworn in Special Advisers and Chairmen with their Board Members of their coming to serve people of Adamawa with their good ideas and intelligence. Adding that their ideas and intelligence will help to build Adamawa of their dream. He assured them all necessary support that will help them succeed in their responsibilities.

Governor Fintiri said that he will continue running a transparent and open Government while calling on people of the State who have valuable ideas to not hesitate to table them before him reiterating his open doors always for valuable advices. He said that his Government is that encompasses all which was why it carefully selected among the abundant human resources in Adamawa- men and women of integrity- who knows the responsibility before them.

In a vote of thanks, Chief Joel Hammanjoda Madaki who spoke on behalf of the sworn in Special Advisers and Chairmen and Board members, thanked Governor Ahmadu Umaru Fintiri for finding them worthy to serve Adamawa State. The former Adamawa State People’s Democratic Party Chairman promised their loyalty to Governor Fintiri led administration and not to disappoint the confidence the Governor has on them.

Also sworn in as the Executive Chairman for Adamawa Primary Health Care Development Agency was Dr. Bashir Suleiman while Adamu Simon, Harman Umar Gombeh, Representatives of Ministries of Health, Finance and Budget, Local Government Affairs and Information and Strategy as members.
Dr. Zainab Kwanchi was sworn in as the Chairman Hospital Services Management Board while the members are Ismaila Lukamso B., Kadiri Mai, Dr. Martin Bimba and representatives of Ministries of Finance and Budget, Health and Human Resources and Justice.