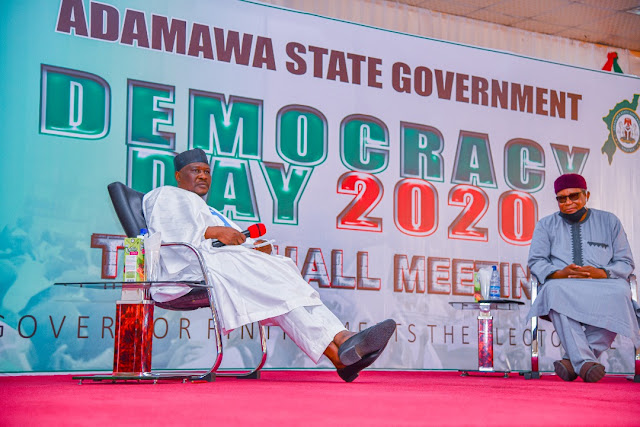 
Governor Ahmadu Umaru Fintiri has explained his salient achievements contain in his eleven point agenda and reiterated his commitment to deliver the agenda as he promised for the people of Adamawa.


The Governor made this known in a town hall meeting organised by the Director General Media and Communication Government House, Solomon Kumangar to mark 2020 Democracy Day at the Banquet Hall, Government House Yola.

Governor Fintiri disclosed that he started his political career from grassroots where he served as Councillor in Madagali and Member in the State House of Assembly where he rose to the Speaker of the House. Adding that through constitutional process former Governor Nyako was impeached and he was appointed as acting Governor of the State for 3 months in 2014 and served well which earned him the name ATM.


The Fresh Air Governor explained that having  he understand what the people want, they crafted what brought him to power in 2019; the yearning of the people of the State which among others include qualitative education, security, welfare of civil servants and other developmental projects. He noted that the past administration has no connection between the leadership and the masses resulting to no serious security meeting held which exposed the State to many security challenges.


The Governor stated that when he came on board he employed new security architecture that has brought insurgency, kidnapping, and other criminalities to the barest minimum.
While explaining the significance of civil service in a democratic state, Governor Fintiri said that his administration made on ground the State Civil Service characterised with irregularities. The Governor said the reform he introduced in the civil service has led to appointment of credible and competent Permanent Secretaries against the hitherto appointing unqualified officers. This he added has bring sanity and effective formulation and implementation of Government policies for the benefit of the people of the State.


In the area of road infrastructure the ATM Governor said that over 300 kilometres  roads were undergoing construction in rural areas which will open them for a viable economic growth and development. While in the State capital he said over 18.3 kilometres of roads are under going construction. Adding that for the first time in the state, his administration started with construction of new roads against the past administration rehabilitation. The roads are at various stages of completion across the state capital and assured they will be completed within time frame of the contract.


Highlighting some of the salient achievements recorded by his administration in education sector within his one year in office which was not known by many, he said his administration has paid UBE counterpart funding for the year 2016, 2017, 2018 and 2019 while he is about to finish the process of procuring of 2020 grant. He further explained that the 2016, 2017 and 2018 grant have been used for the purpose intended in public schools.


He stressed that his Government is paying monthly N10.5m for buying of learning and instructional materials for public schools in the State which has end the era of PTA buying chalk and other leaning materials in public schools.


He disclosed that out of the 600 public schools in the State which he employed consultants to assess their conditions, his administration has  selected the ones with pressing need to start their rehabilitation and reconstruction and very soon they will receive a new face lift.


In the area of health, Governor Fintiri said it was last, during the administration of Nyako that cottage hospitals were built in the State noting that the immediate past administration has build only one in the State and pay no serious attention to health sector which contributed in worsening the health facilities.


He disclosed that his administration has embarked on total reconstruction of six General Hospitals in the State and to build five new cottage hospitals in Shelleng,  Lamurde,  FUTY Sengere,   Gombi and Gulak. He said that his administration was able to get intervention from PF for health sector in especially Gulak which fall under community that was affected by insurgency.


Governor Ahmadu Umaru Fintiri explained that his administration Inherited a government  that was borrowing 3.2 billion naira to pay salary and bulk of debt resulting to Adamawa paying over 1.1 billion naira monthly and others amounting to about 700 million debt. He added that the immediate past administration has destroyed the economy of the state so much that it was unable to pay civil servants salaries


He said when his administration came on board, through the advise of experts, he met the State House of Assembly to approved the extension of the period of the settlement of the debt with banks which was approved. That enable his Government improve on the State economic hence, prompt payment of civil servants salaries.


Governor Ahmadu Umaru Fintiri therefore call on all to support his administration so that together they will build Adamawa of their dream.


Highlight of the town hall meeting was session of questions and answers and commendations by Faith Based Group, Civil Society Association, Labour Group among others.