Home » News » NEWS: Indian to Harness from the Abundant Resources in Adamawa State

NEWS: Indian to Harness from the Abundant Resources in Adamawa State 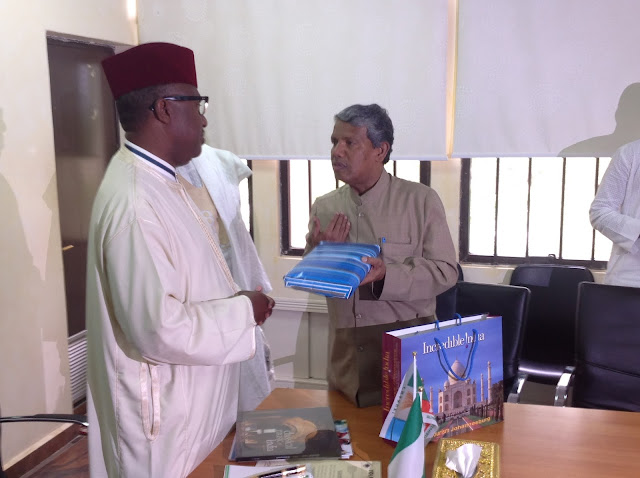 
Adamawa State is blessed with among others, vast agricultural, mineral and tourism potentials which if properly harnessed will boost the socio-economic well-being of not only the state but the country at large.
It is against this backdrop that the His Excellency Governor Mohammed Umar Jibrilla is calling upon prospective investors to come and invest in the Land of Beauty.

The Governor made this call when he received the Indian High Commissioner to Nigeria Mr. A.R. Ghana Sham who paid him a courtesy call at the Government House, Yola.

He said "Government has put adequate measures that will create enabling environment for investors and to harness from the enormous resources in the state."
Earlier in his remark, the Indian High Commissioner to Nigeria Mr. A.R. Ghana Sham said "He was in Adamawa State to congratulate the Governor over his emergence as the Governor of Adamawa State and to seek areas of collaboration with state in terms of investments."
He decried the influx of Nigerians to Indian seeking for medical treatment a situation he said could boost revenue generation in the state and country at large if health institutions are equipped and given the desired attention.

Also in his response, the Adamawa State Commissioner, Ministry of Agriculture Alh. Adama Waziri said "Adamawa State and India have a long standing relationship" stating that India already have an investment in the state one of which is Afcott.