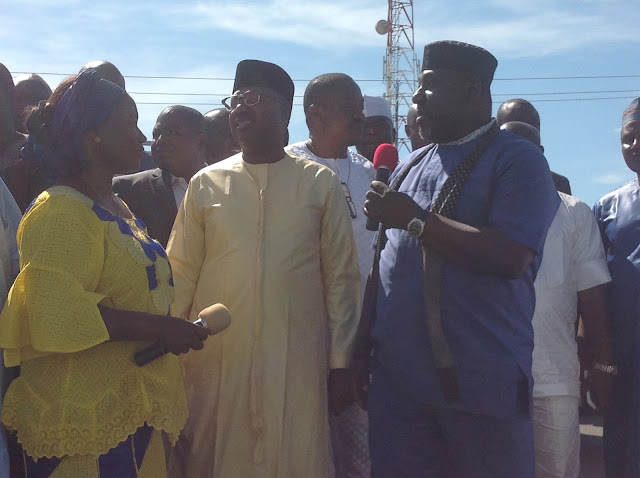 The Adamawa state government has provided a large parcel of land to the Rochas Foundation in order to enable the Foundation build a school for the less privileged in the state. This was made known by the Executive Governor of Adamawa State, Senator Muhammad Umaru Jibrilla when he took visiting Governor Rochas Okorocha of Imo State on an inspection of the site along Gerei Road within the outskirts of Jimeta-Yola.

According to Governor Muhammad Jibrilla, he decided to personally take his Imo counterpart to the site on a Sunday inorder to underscore their joint commitment to the development of Education especially for the most vulnerable persons such as the phiscally challenged and the less previledged in society. Governor Muhammad Umaru Jibrilla was particularly appreciative of the steps taken by Governor Rochas Okorocha in promoting knowledge among the less previledged.
Senator Muhammad Umaru Jibrilla used the opportunity to call on well meaning Nigerians to invest in education, adding that the sector is the bedrock of all development. He commended  Gov. Rochas Okorocha of Imo for the provision of a secondary school for the less privileged in Adamawa state.
He added that Adamawa state was one of the educational disadvantaged communities in Nigeria a situation that was compounded by the Insurgency and the destruction of educational facilities in the State. The Governor further assured Governor Rochas Okorocha of support by the state government.

The area allocated to Rochas Foundation was formally used as an Armature Golf Course. However, Adamawa State Government considers building a School at the site as being of greater Public Interest. The Adamawa State Governor maintained that public interest surpassed the interest of an individual or group of individuals. However, Senator Muhammad Umaru Jibrilla promised to provide an alternative space for Adamawa State Golfers to serve as their Golf Course. The Governor said ``We will provide the Golfers an alternative place because I know that they too fully understand that public interest surpasses any group interest ’’

Earlier, Owelle Rochas Okorocha, who is also the chairman of the Rochas Foundation said the construction of the school would start by January 2016. He said that the gesture was to fulfil the promise he earlier made that his foundation would build a school for the Internally Displaced Persons and other vulnerable persons in Adamawa State. He said that the foundation would incorporate the Attorney General, Commissioner for Education and the Speaker Adamawa State House of Assembly as Board Members. He said that the board members should ensure that the enlistment was purely based on the less privileged.

He said that 75 per cent of their students were the orphans, adding that the foundation would train the students to the university level.He said that the school would contains a hostel, staff quarters and sports complex among others.
08:11
Adamawa Daily Reports
News
Email ThisBlogThis!Share to TwitterShare to Facebook