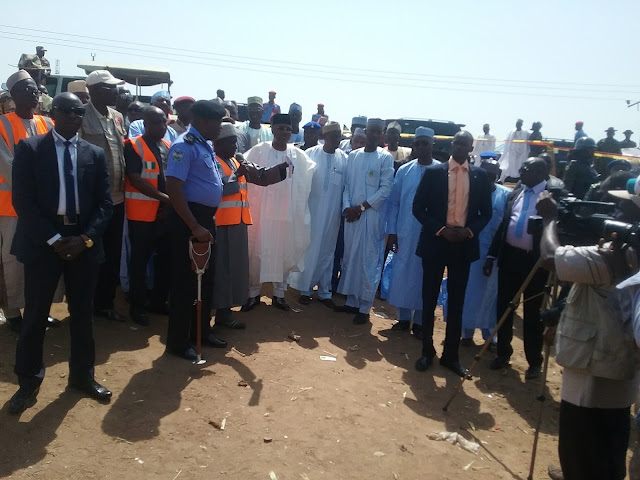 By: Tom Garba,Yola and Abubakar Mohammed
In an effort to cater for victims of disasters, the National Emergency Management Agency (NEMA) has donated drugs and assorted medical consumables to three hospitals housing victims of Yola bye pass explosives in Adamawa State.

Presenting the medical support and assistance to the three hospitals namely, Federal Medical Centre, Specialist Hospital and Peace Hospital in Yola, the state capital on Wednesday, the zonal coordinator of NEMA Alhaji Saad Bello, who said the gesture was meant to supplement the effort of these hospitals that have been offering free medical assistance to victims of bomb blast in the state.
Shortly after the presentation, Bello told Journalist that the idea is to prepare ahead of any eventuality of future bomb blast or disaster, adding that usually when bomb blast occurs, the hospitals housing the victims run short of drugs and medical consumables. 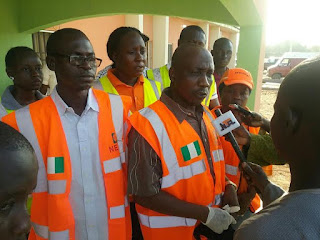 He observed that these bomb attacks is usually being carried out at night when drugs may not be available, hence his organization desire to provide drugs to the hospitals to enable it respond to such emergency situations.
Bello explained that the gesture was also to encourage the hospitals to continue to offer free medical services to the victims.
" The bomb blast usually affect large number of people and the hospitals responsible  for the treatment of the bomb blast victims needed to be equipped so as to Carter for large number wounded "he said.

He extended the sympathy of Director General of NEMA Alhaji Muhammad Sani Sidi who would have personally donated the drugs but for some unavailable reasons
Bello said the DG called appealed to Nigerian to emulate the owner of the Peace Hospital in Yola who have been providing free medical assistance to victims of bomb blast in the state.
Bello further said the figure of the last Tuesday in the state bomb casualty still remain 34 dead and 80 injured adding that 45 to 46 percent of those  injured have been discharged from hospitals.
Receiving the drugs, the Medical Director of Federal Medical Centre, Yola, Professor Mohammad Abubakar Auwal said the donation will go a long way of supporting victims of bomb blast.
He said the hospital will judiciously use the drugs adding the victims of the last Tuesday bomb attacked on the state were fast recuperating from wounds they sustained from the bomb blast adding that 45 percent of the bomb victims have been discharged.

On his part, another beneficiary, the Medical Director and owner of the Peace Hospital, Dr Niyi Oriolouwo said the gesture was a welcome development adding that his hospital only provides free medical assistance as part of it social responsibility to the state.
He however appreciated NEMA and the state Government for the gesture and for remembering private hospitals.