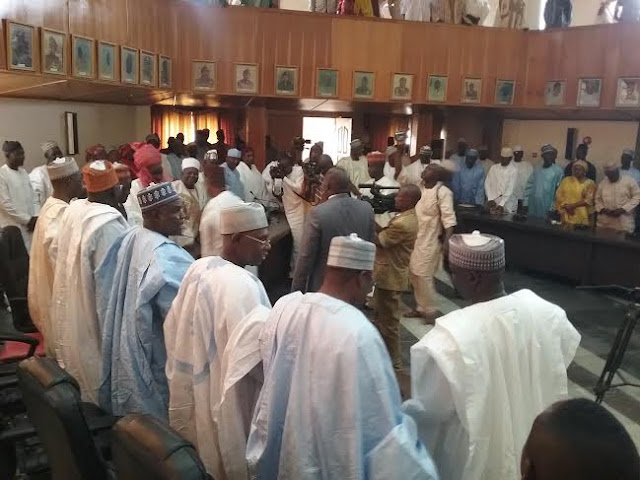 The people of Adamawa state have been called upon to tolerate one another and to be united and live in peace and harmony for the overall development of the state. Governor Muhammed Umar Jibrilla made the called when Nzanyi Community from Maiha Local Government Area paid   a solidarity visit to him at Government House Yola.
The Governor comment them for their hard work and honesty in transacting in day to day activities with others, stressing that the Community were very lucky to have their son as Governor of Adamawa state which he described as a proud to Nzanyi world over; he pointed out that Prudence, Transparency couple with Accountability are always be the top priority of his administration and promised to provide dividends of democracy to the people of Adamawa state.
Earlier in  a brief  remarks, the Chief of Staff  Government  House,  Alhaji  AbdurRahman  Abba  Jimeta  had enumerated some of the remarkable achievements recorded  by Governor present Administration within  the short  period in office,  which includes the provision of infrastructure, Health care delivery, Education, Agriculture  and other social amenities  to the electorates  at the  grassroots. 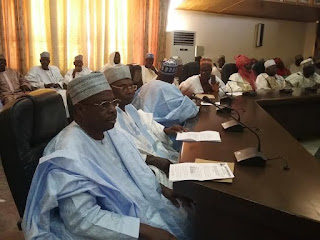 In his speech, the state Chairman of Nzanyi Community Alhaji Buba Ngura, said “Members of the association were at Government House in solidarity visit and also to congratulate him over his successful inauguration as Governor Adamawa state”. He appealed for the completion of Maiha cottage Hospital and to upgrade it to General Hospital, Maiha - Pella road as well as other abandoned projects in the area.
He however said that the association is optimistic that the His Excellency will fulfill all his campaign promises to the people of Adamawa state.
07:58
Adamawa Daily Reports
News
Email ThisBlogThis!Share to TwitterShare to Facebook