Home » News » NEWS: Buhari is the most exemplify person who leads with the fear of God----- Senior Adviser

NEWS: Buhari is the most exemplify person who leads with the fear of God----- Senior Adviser 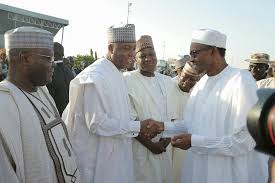 President Muhammadu Buhari has stood for truth and proven to be a leader that has integrity, fear of God and leads with examples especially in his current fight against corruption and injustice in the country.

The Special Adviser to the  President on Political Matters attached to the office of the Secretary to the Government of the Federation (SGF),  Rt Hon. Gedion Sammani made the disclosure over the weekend shortly after the wedding ceremony of the daughter of Secretary to Federal Government (SGF)  Chief Babachir, David Lawal.

He said that only those who are upright and are not involved in corrupt practices can work with Buhari adding that a corrupt person cannot last in the current administration.

The former speaker of kaduna state House of Assembly in the second republic said the President has political will to transform the economy of our great nation, stressing that with the caliber of people surrounding the President, he believed that they would revitalized the economy of Nigeria.

"That is why Mr President took about three months to search and identify responsible people to form a team that will pilot the leadership of this nation, we are confident with the help of God Nigeria's economy will riset again.

He urged Nigerian leaders to lead by examples , be patience and do little sacrifices to support the current administration of Buhari so as to yield positive results to Nigerians.

The political Adviser lamented that it is sad for some people to loot money meant to be used to purchase military wares for the fight against insurgency in the North East adding that if people can steal money meant to protect lives and properties in the North East, its simply mean that Nigerians needed to change their attitudes and perceptions of wanting to be rich at all cost.

sammani said that ill gotten wealth or riches has an expiring date adding that it doesn't make sense if you're enjoying at the detriment of other Nigerians.

He also sympathizes with the victims of the last Friday bomb blast saying that the Buhari administration was on top of the security situation in the North East. He noted that the Boko Haram insurgency have been degraded by military and believe that very soon the Boko Haram menace will be a thing of the past.

He said it is the joy of every parents to give their children in holy matrimony adding that the only way to enjoy's ones marriage is to be patience and have the fear of God.

However prominent among those who graced the wedding ceremony are,  Chief Ahmed Tinubu, Alhaji Aliko Dangote, Ministers, pastors and others
08:30
Adamawa Daily Reports
News
Email ThisBlogThis!Share to TwitterShare to Facebook