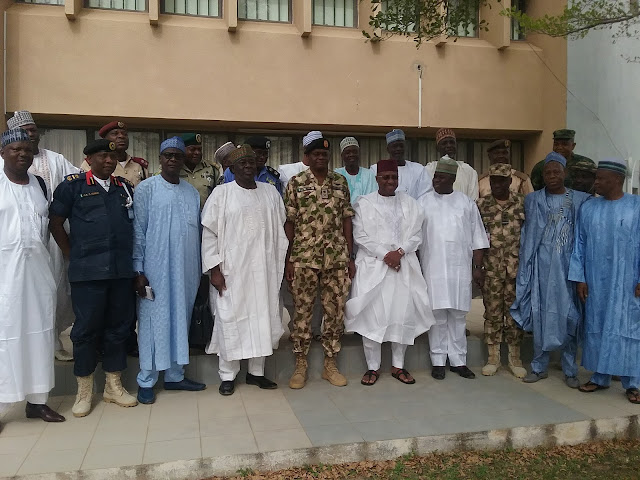 Governor Muhammed Umar Jibrilla has  commended  security  agencies in Adamawa state  for their efforts in maintaining peace and security.
The Governor made the commendation when he received Members of the inter-ministerial committee  recently  inaugurated by the Honourable  Ministers of Defence  and Interio  in Abuja.

Governor Jibrilla noted that the security agents in the state  has shown that protection of the lives and properties of citizens remains  one of their professional  conduct  and patrotism  as well as  self service to the people of the  country.
" we  appreciates the efforts and services of  all the security agencies for their efforts in maintenence  of peace  and harmony in Adamawa state " he  pointed out that the presence of Military  in the areas affected by the insurgency  is very paramount,  people in those areas  are now  feeling conformable  with the  presence of the  military in their  areas. 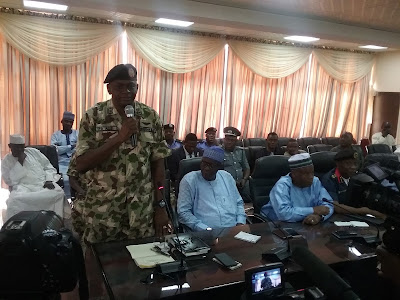 Earlier in his presentation,  the leader of the committee  Major General  Fatai Oladipo Alli said   they were in Adamawa state to find out  the level of  destruction  done by insurgents; and Federal government  on the  plans to handover  all the Liberated  areas  to Civil  laws enforcement  agencies.

General  Fatai  Alli said  the inter - ministerial committee  was set up by the Ministers of Defence and Interio  to tour Adamawa, Borno and Yobe states ,with a view to restore  normalcy and  peace.

He pointed out  that the  committee will  visits Madagali,Michika, Mubi-North and Mubi South, Maiha as well as Hong and Gombi Local government areas to find out the  true  position of  things  in those areas and to report  back to the Defence  headquarters in  Abuja.