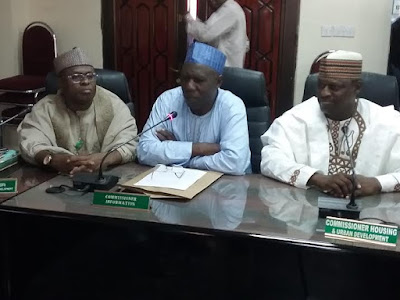 This was diaclosed by the Honourable Commissioner Ministry of Information and Strategy Comrade Ahmad Ibrahim Sajoh along side Honourable Commissioner of Finance Hon. Mahmud Sali Yunusa and that of Local Government  and Chieftancy Affairs Alhaji Mohammed Barkindo Mustapha at the end of the States Executive Council Meeting  held at the Council Chambers of the Government House Yola on Wednesday 18th May 2016.

The Commissioner of Information and Strategy explained that other issues  discussed by the Exco  particularly  in keeping with the pledged by His  Execllency Governor Muhammed Umar Jibrilla  to ensure that  after due verification of the primary school Teachers and the  Local government staff their Four Months outstanding salaries would be  settled  to the verified staff after the  Government received the  report by the committee on  verification.

The  EXCO also  noted that the  salaries of the Local government  staff  would be  automated pointing out that the  measures  is delibrate  so that the Local Government Staff  would be able to receive  their salaries  alongside  with  the state  Civil servants  at once. Hon. Sajoh also announced that the Exco discussed on the issue of  funding the Adamawa State University Mubi so that the University would be autonomous  as required by the  Governing council of the University. 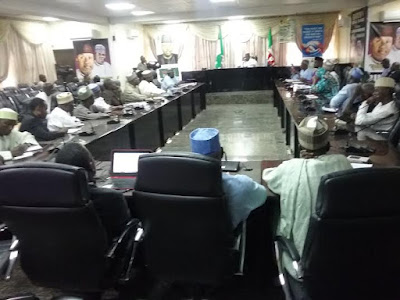 Comrade Sajoh also revealed that the construction  work  of Kiri - Shelleng  road would  soon be  commence by the  present administration, explaining that Governor Muhammed Umar Jibrilla is very categorical about the Shelleng  road as the Governor  always  mentioned  his desire severally  to see that the road construction  was actualized. "The  Shelleng road is one of the  roads that Governor Muhammed Umar Jibrilla is very categorical about  during the  campaigns  and he mentioned  his desire to  fulfilled that promises  severally  at council level and at different  functions ". He had also explaned  that the  Exco  had noted  the  Shelleng road and the  matter  is being tabled  and would be resolved  after the  real Technical  details  that  would inform the council to take decision on the matter.

Earlier,  The Chairman Governing Council of Adamawa State University Mubi  Professor Sa'ad Tukur  had presented  a proposal to the  members of the State Executive Council  for the handing over of Mubi  Burnt Bricks Company  to the  University  for effective  management of the company  so as to  increase the revenue Base  of the state  government.

Professor Sa'ad Tukur also informed members of the state executive council that lack of  funding is the  major obstacle of the University  especially in the areas of  Research  and Development  which is very essential to the  University.
11:44
Adamawa Daily Reports
News
Email ThisBlogThis!Share to TwitterShare to Facebook