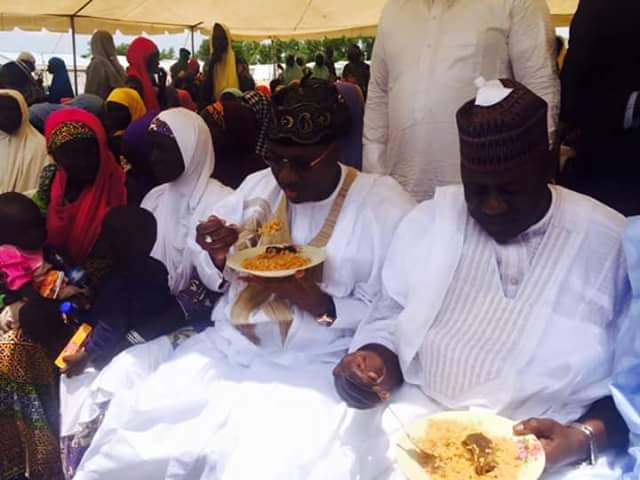 Internally Displaced persons in Adamawa state  have been assured of  adequate security  of their  lives and properties  by government at their  respective  camps.
Governor Muhammed Umar Jibrilla made  this known during 2016 Eid - El  Kabir Sallah  celebration held at the Malkohi  IDP Camp.

Governor Jibrilla  said  he decided to  celebrate this years Sallah celebration with the less privileged and vulnerable  persons   in the  Camp  because of the  concern and magnanimity  he has for the  IDP'S  in the  state.

The Governor also explained that government  intents to  rehabilitate all the  public facilities such as schools, Hospitals, Markets, and places worship destroyed by the insurgents in the Northern part of the state.
He also commended  President Muhammadu Buhari for his efforts to  ensure peace has  restored  in the  occupied  areas of the state. 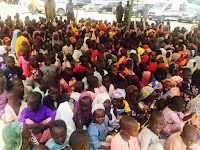 He however  said that  Federal government  has introduced a  programme  on Agriculture  tagged "Anchor -Borrowers  scheme " and  called on the Internally Displaced persons  to register with the  scheme in order to  boost food  production  in the  country .
Earlier in his remarks the Honourable Commissioner Ministry of Information and Strategy Comrade Ahmad Ibrahim Sajoh said the  present administration under Governor Muhammed Umar Jibrilla  had decided to  celebrate the 2016 Sallah celebration  with the  IDP'S  so as to show that  government has  their  plight  at heart and  concern.
The  Information Commissioner  also  called on the IDP'S  to always  appreciate government  gesture as government is  doing everything  humanly  possible to  see that they have successfully  return  to  their  respective  homes peacefully.

Sajoh  also  explained that  government has made  a  commitment to  buy materials produced by the IDP'S at the Camp  and also promised for  government  assistance in order to make them  self -reliants in the society .
During the colourful  celebration, Governor Muhammed Umar Jibrilla Eat at the same  plate  and dance with the IDP'S. 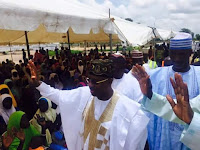