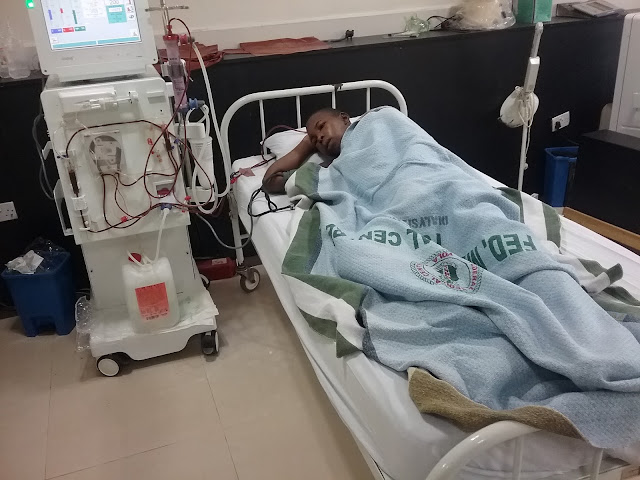 Contrary to an online report by The Periscope,  that Isa Hamman,  an indigene of Adamawa State and a patient of kidney failure,  is dying in Kano due to lack of proper medical care and financial commitment from the Adamawa State government.

The mother  of the patient Amina Hamman has stated that her son,  Isa, is undergoing good and progressive medical treatment at the Aminu Kano Teaching Hospital (AKTH) and the report that her son is dying is not true.

Speaking to our reporter at the premises of the hospital Friday evening, Hajiya Amina also denied any contact with any journalist from any medium of such story.

The Periscope had earlier  posted a story titled, 'my son is taken to Kano to die - Isa's mother' on their website.

" Isa’s mother was in tears at AKTH when The PERISCOPE paid a visit. She told the news crew this today, that it was certain that her son would give up to dialysis as the only remedy for which was short of recommendation for his survival, in a sense that it could not completely play the function of a kidney", the story reads in part.

However, Isa's mother refuted that saying,  "I did not speak to any journalist about my son here in Kano,  and nobody visited to ask about his health before now. The story is not true. You are the first press people I am talking to since we arrived Kano".

" The Adamawa state government has been very supportive and my son is receiving good and progressive medical treatment here. All investigations will be concluded by Monday and a date will be fixed for full report on when the kidney surgery will hold".

"The kidney donor is also here with us, and everything is all set for the kidney surgery as investigation is going on . I just pray some people are not trying to politicise my son's condition, because that will be very unfair as the government is giving us all the neccessary assistance needed for the success of the surgery", she concluded.

Also speaking to our reporter, the patient's uncle, Malam Umar Isa Yaya,  who is also in AKTH with the family expressed gratitude to Governor Bindow of Adamawa State for sponsoring the medical trip to Kano and donating N5m for the surgery.

Malam Yaya further denied that any discussion about taking Isa to India as speculated by The Periscope in their online report.

" There was no such discussion between Adamawa government and Isa's family. India was never mentioned, the agreement was to bring him to Kano for investigation and surgery,  which the governor sponsored from his pocket not the State coffers".

'I wonder why any journalist will fabricate such a story to tarnish the image of the Adamawa state government and spoil the good relationship between my family and the government ", he lamented.

Our reporter met Nana Asmau Gwadabe,  a Kano-based journalist and media consultant who has always been at the hospital.

Gwadabe stated that she had held a discussion with the Chief Medical Director (CMD) of the hospital,  Prof Aminu Zakari who had linked her to Dr Aliyu Abdu, a consultant nephrologist and Dr Abdu briefed her on all stages and advice on the health situation of Isa.

"I also spoke Dr Sharfaddeen, a Neurologist,  who promised to fix a time for a meeting with the doctors and the patient's family to give them a clear picture on how the transplant will take place".

"I always report to Adamawa State commissioner for health,  Dr Fatima Abubakar, Secretary to State Government,  Dr Bindir and Principal Personal Assistant to the governor,  Abdullahi Bakari on the update of the patient",  Gwadabe concluded.

When our reporter proceeded to Isa's sick bed in the ward. The patient was fast asleep with two doctors in sight attending to his medical needs.

All attempts to reach the spokesperson of AKTH on the issue proved abortive as his phone could not be reached and text messages sent to him weren't replied as at the time of this report.
08:34
Adamawa Daily Reports
News
Email ThisBlogThis!Share to TwitterShare to Facebook