NEWS: Local Government councils Chairmen have been called to operate on zero Tolerance to Corruption... 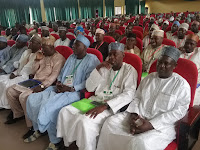 In continuation of  the on going Retreat  organised for public office holders  and elected representatives  in Adamawa state, Local Government council Chairmen, Vice
Chairmen,  Secretaries  and elected  Councillors have been encouraged  to work in line with  Zero tolerance  on corruption, Mismanagement, and wastage of public funds.

While declaring open the Two  Days  Retreat  for Local government  chairmen, Vice
chairmen, secretaries  and elected councillors, Governor Muhammed Umar Jibrilla who  was represented by Deputy Governor Engr. Martins Babale  urged the participants to  always  took electorates at the grassroots as their first priority  above anything else.
Engr . Martins Babale  explained that the present administration under Senator Muhammed Umar Jibrilla  is people  oriented  government and  cautioned the participants  not to undermine  the policies and programmes of the government aimed at  move Adamawa state forward.

He explained that the Retreat is  designed to  build capacity  and develop  the participants  on their roles to provide good and purposeful leadership  at the grassroots.

While congratulating the local government chief executives for their successful inauguration  in office, the  Deputy Governor  had also  commended the organisers of the  Retreat  for the good  initiatives  and hope that it will be  continue  for the progress and development of Adamawa state.

In his  lead paper presentation on Leadership  at Local government  level,  the Secretary to the State Government Dr Umar Buba Bindir highlights  the Vision, Mision  and Focus of the  Governor  Bindow's  administration and  beyond.

He  explained that the  local government  councils  should  embarked on  aggressive Revenue  drive  so as to reduce over dependance on  statutory  allocation,  stressing that the local  councils  to ensure  maintaince  of peace and security in  their  respective local government areas.

The  Commissioner also  cautioned the  council  executives  to avoid  taken unnecessary  Loans  and over drafts  unless  where  necessary. Other papers presented  at the Retreat  includes: "Public  Relations and protocols, Visibility and Etiquette in Governance" by the Honourable Commissioner ministry of Information and Strategy Comrade Ahmad Ibrahim Sajoh, "Legislation, Constitutionalism and Relationships among the Arms of Government" by the Adamawa state  Attorney -General and  Commissioner for Justice Barrister  Bala Silas Sanga, "Enhanced Revenue  Generation;  A panacea for sustainable  Development"  by the Executive Chairman state Board of Internal Revenue, "Peace Imperative: The need for Peace in post conflict in Adamawa" by the Security Adviser to the  Governor  Retired Colonel Mohammed Lawal  Idris.

Other  paper presentation  includes : "Due  process  in Governance : The Imperative of Transparency and Accountability"  by the Director - General  Bureau for public procurement  Alhaji  Abba B. Umar and "Financial  Institutions and  Regulations: Variable  Tools for  Good Governance" by the Honourable Commissioner ministry of Finance and Budget  Mahmud Sali Yunusa  among others.
Certificates of attendance were issued  to the participants at the end of the Two  Days Retreat.