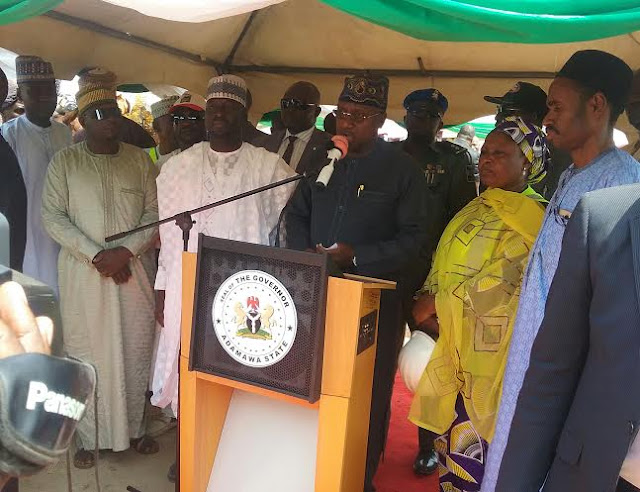 Ganye Local Government Area is one of the oldest LGA created in the state.It is located at the southern part of Adamawa state. Agricultureis the predominant occupation of the inhabitants because of the fertile land for cultivation of crops and rearing of animals the LGA have, it has become one of the LGAs in the state that produced staple food–both subsistence and in commercial quantities. It is well known as  “The Food Basket of state”.

Alas! The LGA is lacking physical and social infrastructure that is why the Government of Adamawa State under the leadership  of Senator Muhammad UmaruJibrilla has prioritized road construction in his administration in order to bring the course of economy rejuvenation and diversification.
This under score the resolve of flagging off of Ganye Township Road, today, 16th November, 2016.

In her welcoming address, the Hon. Commissioner of Ministry of Works, Barr. Lillian Stephen Nabe thank His Excellency, Governor Bindow for approving construction of township roads in Adamawa State and in her domain. She call on the people of Ganyeto give their maximum cooperation to the construction firm to complement Governor Bindow’s effort. She enjoined the people to not dump refuse in drainages after the drainages have been constructed. 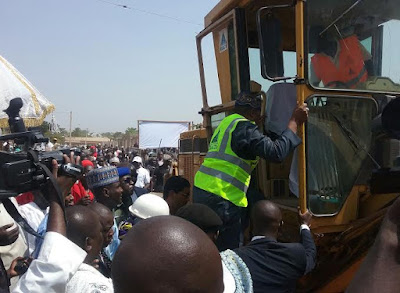 The Chief of Staff Government House Yola, Alhaji Abdulrahaman Abba Jimeta highlighted that the phase one road to be constructed in Ganye Town will commence from Buwangal Junction to Sangasumi which has the total length of 6.7km.

He added that the contract was awarded to Triacta Construction Company and will be completed in 6 months. On the other hand, he had stated  that Governor Bindow has aproved the renovation of Michika, Ganye, Numan and Yola General hospitals and that the hospitals would be upgraded to referral centres. He added that very soon, the rehabilitation work will begin with Ganye General Hospital.

Jimeta said that Governor Bindow has already declared state of emergency on education sector in the state from primary to secondary schools and that the government will standardise them and improve the welfare of teachers as well.

The Executive Governor of Adamawa State, Senator Muhammad UmaruJibrilla, in his remark thanked the people of Ganye Chiefdom for always giving his administration all the maximum supports they could offer.
He call on the people of the state to support president Buhari in his  fight against  insurgence. He enjoined  them to always pray for their leaders to enable them succeed in governance.

More so, he had promised to fulfilled the campaign promises his addministration made to the people.

on the other hand, the GangwariGanye of Ganye HRH. Alhaji Umaru Adamu Sanda thanked the governor for approving the construction of Ganye Township Roads. He admonished the people of his Chiefdom to support the government of the day.

The occasion was grace by politicians, businessmen and well wishers.
14:27
Adamawa Daily Reports
News
Email ThisBlogThis!Share to TwitterShare to Facebook