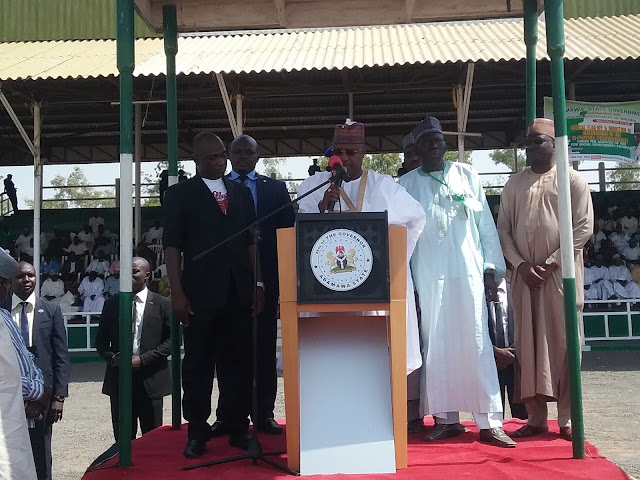 The Governor made the  commendation at the  flagging off of the  programme  held at the  Mahmud Ribadu Square Yola . He stated that  Adamawa State Government  will  continue to collaborate with the Federal Government to  ensure that the  programme  succeeds in the State .

He appreciated the effort of President Muhammadu Buhari for  the initiative and said that the N-Power  Programme is certainly going to create employment  and to reduce  poverty in the  country.
On the other hand, he called on the  beneficiaries  to take good advantage of the  programme  so as to be self reliance in the society. He described  the youths  as the future  leaders of the  country.

In his remarks,  the Adamawa State  Coordinator of N- Power Programme  Retired  Commodore  Usman Sali Bodes  stated that the  programme  was introduced to  empower youths, Women and other vulnerable  groups in the society .
He also  highlighted  that the  programme  is centered  on two categories.  In the first phase of the  programme  is Teacher's  Volunteer Corp, this is  focus primarily on  education, Agricultural  extension , public  Health  and community  education  as well as training  and empowerment  of knowledg.
Commodore Usman Sali Bodes  explained that the other programme is the School  Feeding programme to increase  enrolment in public schools  and to encourage  local  farmers  to produce  food locally  to feed pupils  in schools which will empower the farmers economically .
He also called on the  beneficiaries to take good advantage of the programme in order to move the state forward.

Also, in  their Good Will Messages ,the Honourable Commissioners  Ministry of Information and Strategy Comrade Ahmad Ibrahim Sajoh , Youth and Sports  Mr. Augustine  Ayuba  and the  Special Adviser on Poverty Alleviation and   Wealth  Creation Alhaji Ayuba Audu  called on the beneficiaries to be more serious in their  responsibilities  as initiated  with  good  intentions by the  Government .