Home » News » News: Members of Adamawa State House of Assembly Paid a Solidarity Visit to His Excellency, the Executive Governor of the State

News: Members of Adamawa State House of Assembly Paid a Solidarity Visit to His Excellency, the Executive Governor of the State 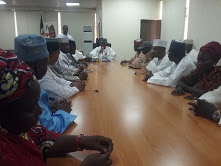 Governor Muhammed  Umar Jibrilla have described the relationship existing between the Executive and the Legislative  arms of Government as very very  cordial . The Governor stated this when Members of the State House of Assembly  led by the Honourable  Speaker  paid him a courtesy visit at his office in Government House, Yola .

Governor Muhammed  Jibrilla  explained that the working  relationship between the Executive arm and the Legislature as commendable  and called on  both arms to maintain the  tempo .
He also called on the  people of Adamawa state  to be united  as one  big family  for the overall development of the state ,emphasising that "Adamawa state is  greater than everybody , the former Governor Murtala Nyako  is my father  and  I don't  have any problem with him , he is a father to me and it is in my own culture  that I don't join issues with  anybody ".

The Governor however thanked the  Leadership of the House  for the support and cooperation  being extended to his administration  at all times , pointing out that the supreme Court  verdict is a victory  to the entire people of Adamawa state and  Democracy as a  whole .

Earlier in his remarks the  Deputy Speaker Honourable Sunday Peter  had informed  the Governor that they were at Government House in solidarity  with the Governor  over the Supreme Court Judgement between the Legislature and the  former Executive arm  over the  impeachment sager of the previous administration .
He stated that the  Members of the House feels it imperative to pay their  solidarity visit to the Governor for the  good cordial  relationship that being  existed  among the Two  arms of Government .

He also said that Members of the State house of  Assembly  would  continue to  use their constitutional responsibilities  and to work as a team with the  Executive arm  for the development of the people of Adamawa state and  for the better .

He however  assured  the Governor that  all the Twenty Five  Members of the  House of Assembly are behind the  Governor  in view of his developmental strides  in the state.
10:40
Adamawa Daily Reports
News
Email ThisBlogThis!Share to TwitterShare to Facebook