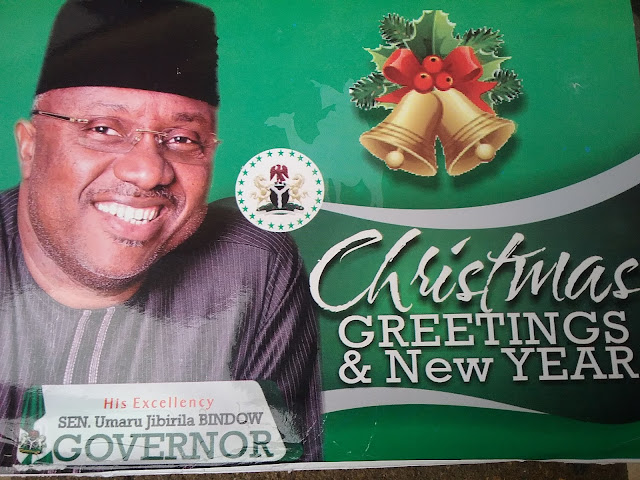 Christians  faithfuls  in Adamawa state  has been  enjoined  to celebrate  this years Christmas  as a sober reflection  and to tolerate one another .
This was contained in a Christmas  Message issued  by the  Honourable Commissioner Ministry of Information and Strategy Comrade Ahmad Ibrahim Sajoh to the people of  Adamawa state.

Sajoh stated that His Execllency Governor Muhammed Umar Jibrilla is particularly happy  that the people of the state  are celebrating Christmas  at a time when the security  situation  has improved  tremendously  and peace has returned to the state .

Governor Bindow  commended President Muhammadu Buhari and service Chiefs for their efforts in the fight against insurgency in the country as well as  for  ensuring that  people  celebrate  Christmas  in Peace.

According to Comrade Ahmad Sajoh  it is a  double  celebration  in Adamawa state  as it's citizens  are celebrating  Christmas as well as for the  collective Victory  which includes  Stability and Development .

While rejoicing with the entire people of the state , The Governor  is not unmindful of the hardship being faced by the people  as a result of  global economic recessions   and appealed to the citizens to be patient and to persevere .

The Governor also reiterated the commitment of his government in rebuilding Adamawa state and  making it the pride of all people  and reminded  the people that the task of  doing that is a collective responsibility for all.

He also  reminded  the citizens  that the festive period is a time of spiritual rejuvenation and also to  reflect  and pray to the Almighty  God  for peace ,Progress and for continuous  development of Adamawa state and the country at large .

The Governor  however wishes all citizens  a Merry Christmas and a Prosperous New Year , he equally reminded  the citizens of the state  to be continuously vigilant and security conscious and to report any suspicious person or object to the security agents for proper  action during the momentous period of the  celebration .