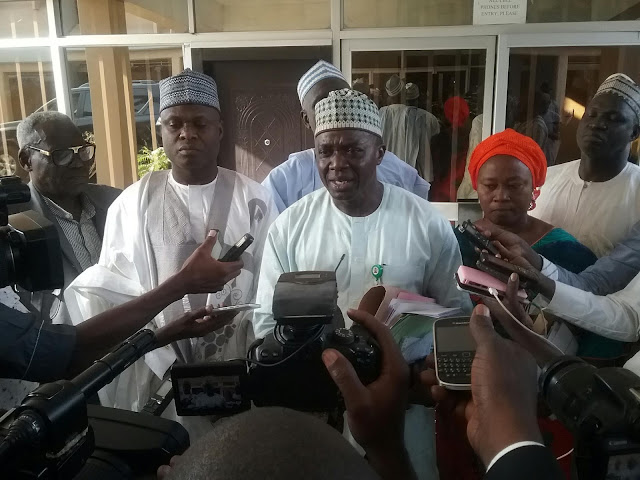 Governor Muhammed  Umar Jibrilla has presided over the Fourth  State Executive Council Meeting  (EXCO ) at the Council Chambers of the Government House Yola.

Briefing Journalists at the end of the Council  meeting, the Secretary to the State Government Dr Umar Buba Bindir along side Commissioners of Education Prof Kaletapwa Farauta  and that of Local Government and Chieftancy Affairs Alhaji Mustapha Barkindo  announced that the EXCO  had discussed and deliberated on a number of issues which includes the  consideration of  a memo submitted by the Ministry of  Education on the state of emergency declared  on Education  by the  present administration as well as the  quantum regards to  revamp the Educational sector which  he announced  will gulped  about Ten to Twelve  Billion  Naira.

He explained that  a powerful  technical and  administrative  committee has been set up to look at it technically so as to know the break up  and  requirements of the state of emergency  into Immediate, Short, Medium and Long term measures as well as the  administrative  components  with a view  to impact qualitative  education on the children of Adamawa state.

The SSG also  said that the EXCO  had a  presentation from the  office of the State  Head of  Civil Service  on the  committee responsible for the verification of Local Government Councils  staff headed by Maurice Bonavulki on the  salaries and  e-payment system which he described as  Dynamics  at the councils, pointing out that  as a result of the committee 's report , about Forty - Five to Fifty Million Naira  were  being  saved monthly, which he described  commendable by the  government .

Dr Umar Buba Bindir  also revealed that the  London  and Paris Club Funds  will addressed the  payments of outstanding  salary arrears  of Primary school Teachers, Health workers and the Local Government staff  and other emoluments. He then added that the  whole Four point Eight Billion Naira is going to be use for the  settlement of the salary debts  owed  by the Local Government staff.

The  SSG also said  the  Council has received a  delegation from UNDP  Country  Representative in Nigeria  headed by Mr. Edward  Kallon who paid a courtesy call on the  Governor  and Council  Members  and had discussed  alot of Multi- Lateral  and Bi-Lateral  agreements  with the government  in order to move the state forward.

In another development,  the Bindir said that the EXCO has received in an audience officials  from the Federal Ministry of Health led by Dr, Modokpe Chukwuma a Director of Food and Administration and  Control who brought in Truckful loads of medical supplies as directed by President Muhammadu Buhari for  the victims of the recent  bomb blast in the state and the Internally Displaced Persons.

Also commenting the Honourable Commissioner Ministry  of Education  Prof. Kaletapwa Farauta  explained that the present Government under Governor Muhammed Umar Jibrilla is taking educational  sector  as number  one priority ,stressing that  already  the state  government has declared a state of emergency on Education  which is the  bedrock for any society  to develop.