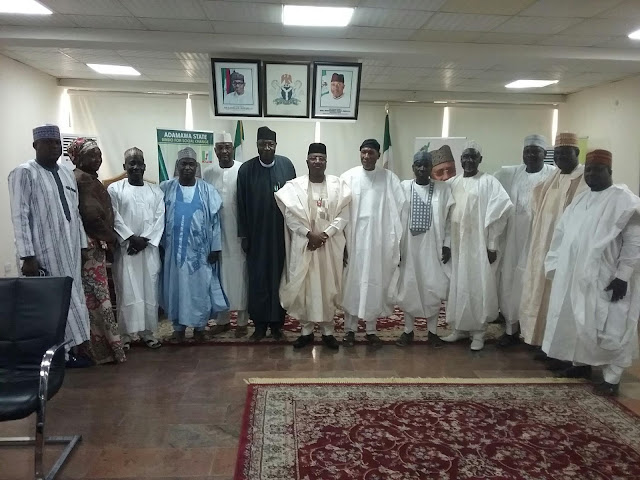 Former Honourable Commissioners in the  Defunct Nyako Administration  have applauded the developmental and giant strides of Governor Muhammad Umaru Jibrilla  in developing Adamawa state  within the shortest period of time.

The former  Honourable Commissioners made the commendation when they paid a courtesy visit on Governor Muhammed Umar Jibrilla in his office at Government House Yola.

Led by Honourable Gidado  Sajoh Gella said the  election of  Senator Bindow as a Governor of Adamawa state is a choice  from the Almighty and pleaded their total  loyalty and support to the present administration under Senator Muhammed  Jibrilla in order to continue to  provide democracy dividends to the electorates of Adamawa state.

While  responding Governor Muhammed Umar Jibrilla thanked the  former  Commissioners  for identifying with  his administration  and assured  them that  his government is  a government for  the entire people of Adamawa state and urged them to join  hands so as to move the state forward.

Senator  Bindow also stated that;  "This government is for all of us honestly,  I think I can not do it alone  but I just want to be a Team player and I am calling all of  you to come and develop the state, and I declare  categorically that  I don't  joint issues with anybody, Everybody that is above me is my father and luckily enough  I don't have any Boss. If I have  any Mai Gida  and I will  declared  to the Press  is my Cheif of Staff. He is My Maigida, because he is my Director -General  campaigns like wise I'm  the one directing him, and we don't wait for anybody from Abuja to come and tell us what to do or how to serve our people "he explained.

Earlier on,  the  Chief of Staff Government House Alhaji AbdurRahman Abba Jimeta had welcome the delegation of former Commissioners to Government House  and enumerated some of the laudable achievements of the present administration under Governor Bindow  by providing  roads infrastructure and provision of basic social amenities to the people of Adamawa state within One and a half year while in office. 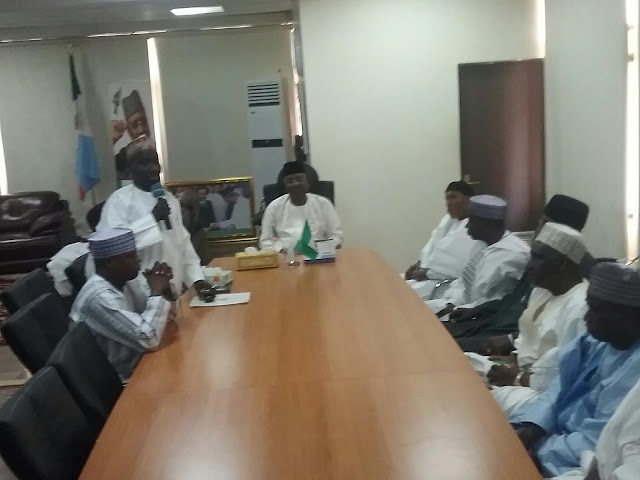