News:I Assure you this Year's Budget is free from Padding - Rep Namdas

The Member Representing Toungo,  Ganye, Jada and Mayo Belwa Constituency of the Federal House of Representatives (Green Chambers),Hon. Abdulrazaq Namdas said this Year's Budget will be free from all form of padding.

The Lawmaker who Is the chairman committee on Media and Publicity of the House revealed that the lawmakers have gainer all the experiences that can avoid uncalled mistakes.

The spoke Man of the Green chambers intimated Journalist weekend in Ganye, Adamawa state while expecting projects he initiated in the constituency saying that both the Executive and the Legislative have acquired more experience are serious and focus. The issue of file missing is not going to be.

"You know you are learning day by day from any job you are doing, the House Is more experienced ,serious, focus and business minded than before." Namdas said

Recall that the 2016 Budget was characterised with much controversies of padding the budget to suit some people's interest.

While inspecting the Ganye Civic Center a Multi Million Project that is intended to have a sitting capacity of 1000 people and to provide jobs for the teaming unemployed Youths of the area, he reiterated that the Civic Center is first of it's kind in the whole of Adamawa state.

He visited all sites with his ongoing projects in the 4 Local Governments he is representing, ranging from schools, solar water systems, Dam and factory water systems.

Namdas also talked much on the African Parliament that went to United States deliberated on issues effecting the African youths. 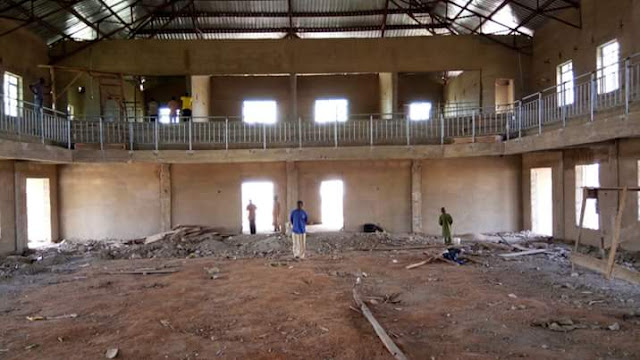