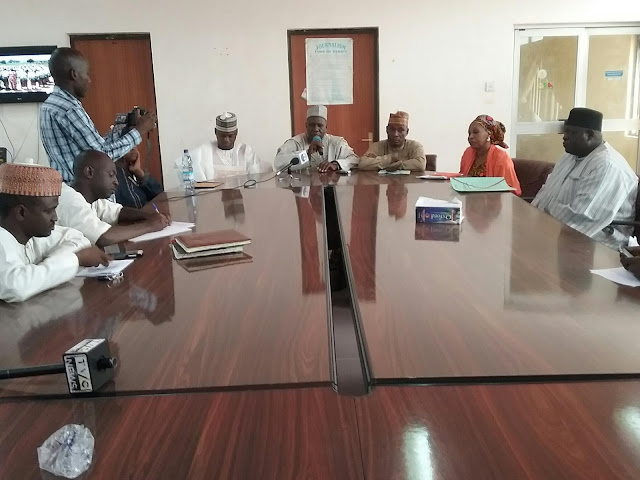 This was diaclosed by the Honourable Commissioner Ministry of Information and Strategy Comrade Ahmad Ibrahim Sajoh along side Commissioner of Finance Mahmood Sali Yunusa, State Accountant -General, State Chairmen of NLC and the NUJ who briefed Journalists on the committee 's  readiness to start payment of the salary arrears to the Primary School Teachers, Health  workers and the Local government staff and other emoluments owed .

According to Sajoh, Governor Muhammad Umaru Jibrilla  had earlier  set up a committee headed by the Chief of Staff Government House Alhaji AbdurRahman Abba Jimeta for the settlement of  all outstanding salary arrears using the London  Paris Club funds.

On his part, the Honourable Commissioner of Finance Mahmood Sali Yunusa revealed that Adamawa state Government has received a  part  payment of Four point Eight Billion Naira (N 4.8b) which is inadequate to settle  all the debts  because the total estimate is about Five Point Six Billion  Naira (N 5.6b)

The  Finance Commissioner also  assured  workers that  not a single Kobo would be  tempered from the funds.

In his remarks, the  State Chairman of the Nigeria Labour Congress  Comrade Dauda  Maina also assured that the committee will do justice to each and everyone  and called on the workers to exercise  patience and understanding  with the members of the committee.

Also commenting , the State  Chairman of NUJ Comrade Salisu Abubakar assured that Journalists would give  adequate publicity on the committee's assignment.