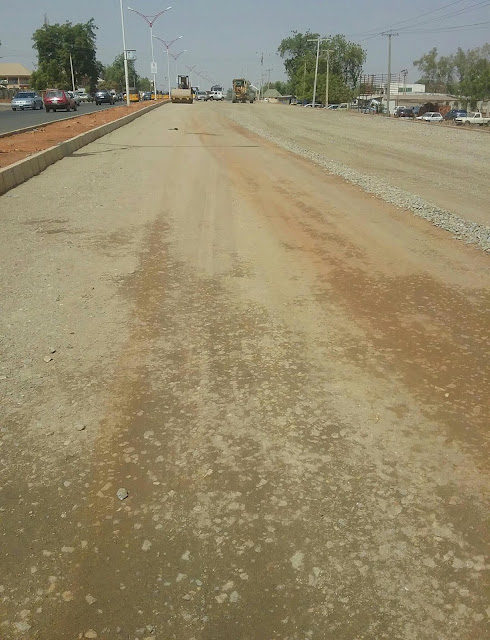 At the inception of the Government of His Excellency, Senator Mohammed Umaru Jibrilla, the Executive Governor of Adamawa State, one of his promises was to provide the state with social and physical infrastructure.

By December 2016, road construction projects covered all the three Senatorial Zones in the state. Besides the Township Roads constructed in the State Capital, Ganye, Numan and Guyuk LGAs Township Roads and Kiri – Shelleng Road in the Southern Senatorial Zones were under various stages of completion. Surprisingly, Roads whose contracts were awarded and later abandoned by previous administration were reviewed and the contractors were call upon by His Excellency for togotiation,  they agreed to complete them. Fortunately,  these roads are also at various stages of completion.

However, the potholes in the State Capital and major towns in the state which has for long been a concern to motorists has become a history. Good drainage system were constructed to cope the annual flooding that is affecting the state capital and its periphery especially the Jambutu Community located at the outskirts of Yola North LGA.

In terms of physical infrastructural development, Governor Jibrilla of Adadawa State has done well. His appointment of the only female Commissioner of Works in Nigeria, Barr. Lillian Stephen Nabe prove beyond reasonable doubt that it was really appropriate. Barr. Nabe, the Workaholic Commissioner of works, with the team of the Civil Engineers of the Ministry scheduled a daily supervision of roads under construction or rehabilitation to ensure the contractors meet the required standard.

With this development in the state, there is a need for the people to complement government’s effort. Alas! Reverse is the case in some communities that are beneficiaries of this project. People attitude towards government own property or projects must be changed,  They should learn how to  take care and  maintain such projects because government property is also our property therefore we have to take good and proper care of.

The  call by the Honourable Commissioner of Works, Barr. Lillian Stephen Nabe each time a road Flagg off was conducted is that people should  desist from dumping refuse in drainages and must adhere to.  Drainage systems constructed by State Government must be kept clean. People should desist from dumping refuse in it. Children should be instructed by their parents or guides not to dump refuse in the drainages. The people should note that if the drainage network system constructed gets blocked with refuse, it will cause flooding during raining season. Indiscriminate dumping of refuse may result to outbreak of diseases such as cholera. It will equally be a breeding place for mosquitoes, thus, disease causing recurrent fever – malaria – becomes  prevalent.