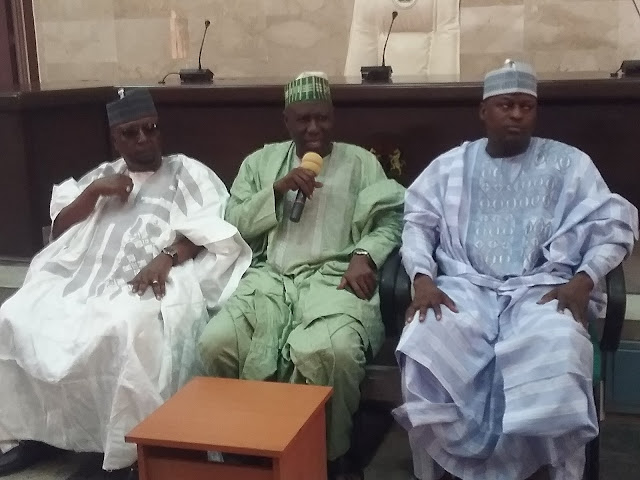 The Adamawa state Government is ready to  settle all pension arrears owed by the  retired civil servants in the state.

This was  diaclosed by the Honourable Commissioner Ministry of  Finance and Budget Mahmood Sali Yunusa along side  Commissioner of Information and Strategy Comrade Ahmad Ibrahim Sajoh  and  the State Head of Civil Service Barr. Musa Kaibo at a Press Conference held at the Conference hall of the Government House Yola.

The  Finance Commissioner explained that with the release of the  Paris club fund  by the Federal Government, the  State Government  is committed to addressed the issue of  Pensions once and for all, adding that  modalities have been  put on ground and  Adamawa state Government is  ready to  settle all the  pension debts owed by the  retired civil servants of Adamawa state.

He said that Governor Muhammed Umar Jibrilla has  made it a priority to  ensure that the  Retired Civil Servants received  their  entitlements at the right time "Every Pensioner  deserves the right  to enjoy his pension and gratuity as his right after a meritorious services of about Thirty - Five years, He added.

He also  pointed out that the  issue of non payment or delay of Pension  and Gratuity  to retired  civil servants  will be a history, stressing that the State Government is working assiduously to addressed the problem regards to  pensions .

The Commissioner of Finance also  explained that the  State  Acting Governor Engr.Martins Babale  has inaugurated Members of the State  Pension Board, adding  that it is  over the  reform  made for the settlement of outstanding pension debts.

He however said that ghost Pensioners  will also be  fetch out, so as to ascertain the  genuine pension  beneficiaries  in the state.  He has also  appealed to the Pensioners to exercise patience  as Government is doing everything possible to ensure that  all pension arrears are being  settle.