Home » News » NEWS:No Any Meaningful Development Could be Achieved Without Agriculture - Governor Bindow

NEWS:No Any Meaningful Development Could be Achieved Without Agriculture - Governor Bindow 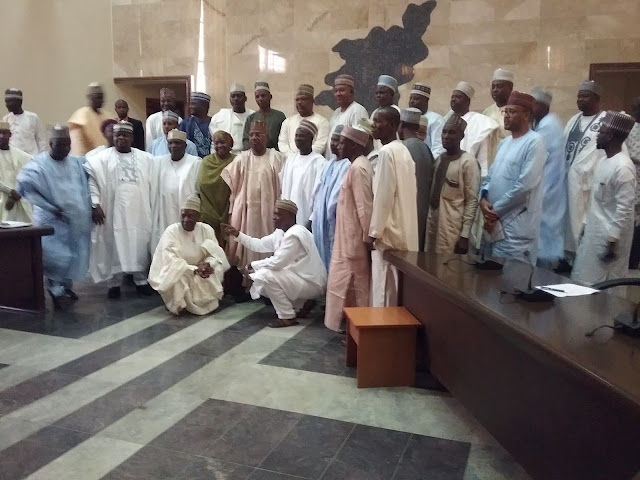 Governor Muhammed Umar Jibrilla has  described Agriculture as a  centre piece of socio-economic growth and development.

The Governor stated this when he granted in audience the National President of  Rice  Farmers  Association of Nigeria  Alhaji  Aminu Goronyo who paid him a courtesy visit at Government House Yola.

Governor Muhammed Jibrilla  said that with  out  Agriculture,  no any meaningful development could be achieved, stressing that  any nation that neglects  Agriculture  it's people were in total disarray  and shambles.

He pointed out that  his Administration  made Agricultural sector  as one of the top most priority .

According to  Governor Jibrilla, the present government  has procured  over One Hundred and Five  Tractors  (105) and other farming impliments  and had distributed  to farmers of Adamawa state  at a subsidised  rate all with a view to enhance  farming  activities and boost food production.

He  appreciated the efforts of President Muhammadu Buhari for  introducing  Anchor - Borrowers scheme to farmers and  described the programme as  timely, stressing that the  programme  is a grassroots programme.

Earlier, the  National President of  Rice  Farmers Association of Nigeria  Alhaji Aminu  Goronyo had commended  Governor Muhammed Umar Jibrilla for the support and cooperation being giving to Adamawa  farmers.

He  said that  Adamawa state Government  has  done it's best  in terms of Agricultural  revolution and  urged other states Governors  to emulate Governor  Bindow.

Also in  her remarks, the  representative of  the Central Bank of Nigeria  Hajiya Amina Umar  commended the Adamawa state Government  for taking the  Anchor Borrowers scheme  a serious  programme, adding that the  scheme  is a linkage  between the Anchors  and small  scale  farmers ,assuring that Central  Bank of Nigeria  will continue to support the  programme  for the sustainability  and the  development of Agric business in the country.