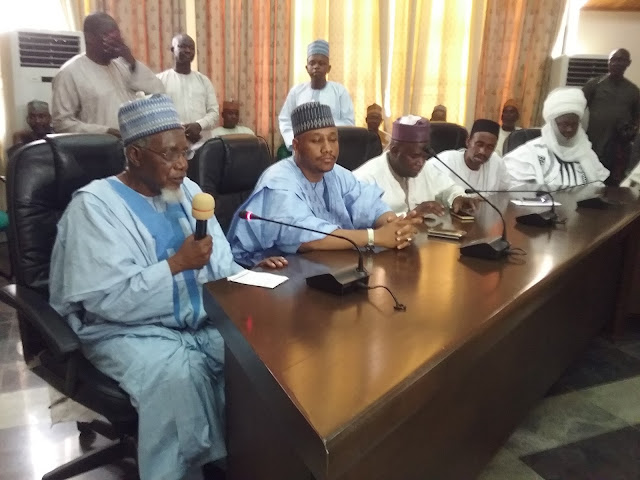 Governor Muhammed Umar Jibrilla has been commended for his giant strides in transforming Adamawa state within a shortest period while in office  as Governor of Adamawa state.

The people of Song  Local government Area  who made the commendation when they paid a thank you visit to Governor Muhammed Jibrilla at Government House Yola  recently.

While  leading the  delegation, an elder statesman  of the area Alhaji  Ahmed Song have told the Governor that the Song community  was at Government House  to thanked  him for his purposeful leadership  by providing Democracy Dividends to the electorates at the grassroots.

Alhaji Ahmed Song  also  thanked Governor  Bindow  for the construction of Gada  Mayo Bridge  that links other communities in the area ,as well as  appointing sons and daughters of the  area into his cabinet.

While responding, Governor Muhammed Umar Jibrilla  commended  the people of  Song  for their unity and peaceful coexistence  and harmonious relationship  with  one another  despite the ethnicity cultural  barrier amongst them.

The Governor also  explained that  his government  has already  declared  a state of emergency on Health Care  and Educational  sectors  in order to move the state forward, stressing that  government  has established  Anchor -Borrowers Center  at Song  Local government Area and that  fertilizers and other farm impliments would be available to  farmers of the  area at affordable rates.

He  however  condoled the people of Song  over the death of  the District Head of  Song who passed away  recently  and offer a  special prayers  for the deceased.

Also in his remarks, the  Secretary to the State Government, Dr Umar Buba Bindir announced that  Governor Muhammed Jibrilla has  approved the allowances for the Traditional  tittle holders  in the state, explaining that government will continue  monitoring the  activities of the traditional rulers across the state  periodically with a view to make the institution  more vibrant and  effective.