NEWS: TRADITIONAL INSTITUTIONS HAS BEEN DESCRIBED AS CUSTODIANS OF CULTURAL VALUES... - GOV. BINDOW 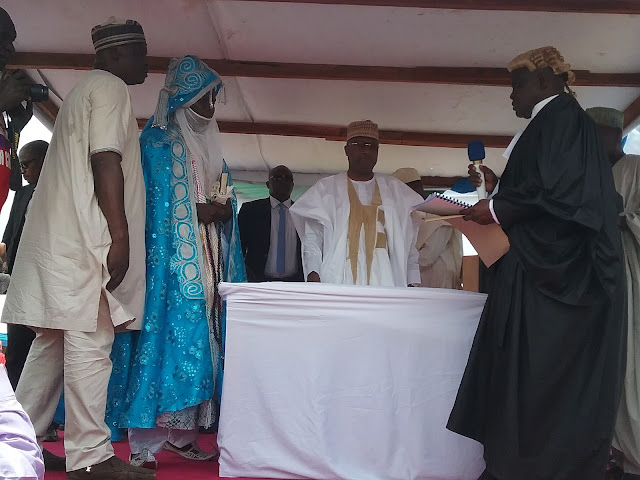 Traditional institutions  has been  described as the  custodians of cultural values and pillars of unity and  peace in the society.

Governor Muhammed Umar Jibrilla stated this during the  Corronation  and  presentation of a first class  Staff  of Office to the 24th  Amna Shelleng  His Royal Highness Alhaji Abdullahi Isa Dasong  at  Shelleng.

The Governor commended  the Traditional institutions in Adamawa state  for their efforts in maintaining peace and security in their domains despite the  numerious  challenges being faced by the Royal fathers.

While congratulating the new  Amna of Shelleng, Governor Muhammed  Umar Jibrilla  urged the people of  Shelleng to  give their total support and cooperation to  the  new Monarch for the overall development of the area and  state  at large.

The Governor also  appealed  the new Amna  Shelleng  to embrace everybody  in his domain  as well as to  ensure  purposeful leadership and  Justice to his  subjects and to make sure that  he advocates  productive ventures among his people.

He also  assured that  government will  provide  fertilizer to farmers of Adamawa state  at  affordable rates for the  2017 farming  season.

He explained that the  construction of Kiri - Shelleng road  which was neglected by the successive administrations  for over Forty years  has become a  history  as his government  resolved  to  fulfil  all the  campaign promises made to the electorates of Adamawa state.

In his response, the 24th Amna Shelleng, His Royal Highness, Alhaji Abdullahi Isa Dasong  had thanked Governor Muhammed Jibrilla  and the kingmakers for finding  him suitable to  rule the people of Shelleng  area .

The Royal father  also called on the people of Shelleng to be united and  engage in farming and other  business  activities  that will  transform the  area for the better. He called on  youths of the  area to shun idealness  and Drug abuse, lamenting that youths are  the leaders of  future generations .

The  Royal father  however  assured that the  people of Shelleng  will  continue to support the present administration under Governor Muhammed Umar Jibrilla  at all times.