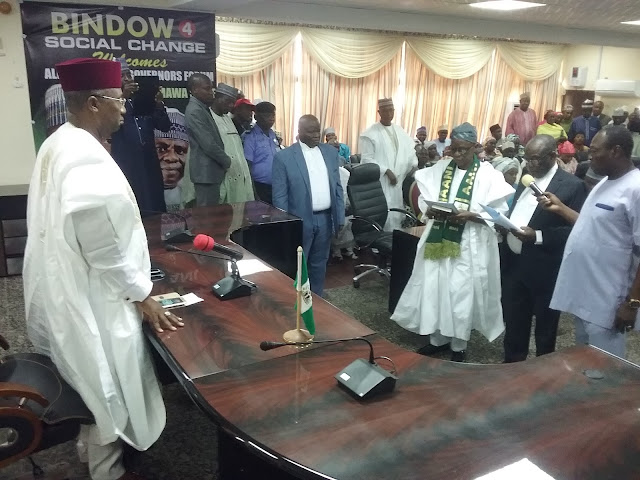 Governor Muhammed Umar Jibrilla  says Transparency, Accountability and Prudence  is the cardinal  principles and objects of his administration.

The Governor stated this during the  Swearing in Ceremony of the  newly  appointed  Head of Civil Service of Adamawa state  Dr.  Louis Solomon  Mandama  (mni) at the Council Chambers of the Government House Yola.

Governor Muhammed  Jibrilla urged the  new  Head of Service to  abide by the oath of office taken as he will be accountable to  his tenure while in office, stressing that  public office is a public trust.

While congratulating Dr  Louis  Mandama  over his appointment, the Governor appealed to the citizens of State to shun Ethnic bias and  religious differences in order to move Adamawa state forward .

In his response, The newly sworn  in Head of Civil Service  Dr  Louis  Solomon Mandama thanked Governor Muhammed Umar Jibrilla for finding  him worthy  of the appointment and promised to contribute his quota towards the development of the state.

He also pledged total loyalty to the present administration  and called on the  entire Civil  Servants to give him maximum  support and cooperation  in order to succeed.

The  Oath of office was administered by the State Chief Judge,  Justice Ishaya Kida Banu and witnessed by other top Government functionaries.