NEWS:Declaration of State of Emergency on Education and Health Sectors is Necessary - Says Governor Bindow. 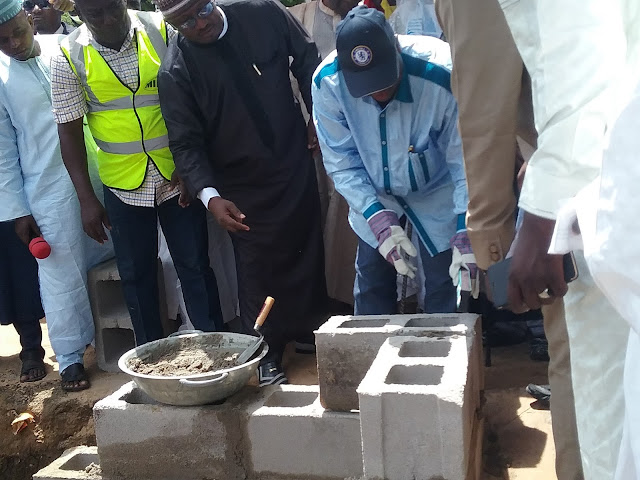 Muhammed Umar Jibrilla has described Villanova Government Secondary school Numan as one of the best  Schools  in Northern  Nigeria.

The Governor stated this during the  Groundbreaking ceremony  for the total renovation of Government Secondary School  Villanova  and General Hospital  Numan adding that his administration already  declared  state of emergency on Education and Health sectors  in order to  provide qualitative  education and  Health Care delivery to the citizens of Adamawa state  for the better.

He  explained that the choosing  of Villanova Government Secondary School  is a delibrate  act because of its importance  and history  in the  Southern part of the state.

He also stated that his government has  also choosed Government Secondary School  Mubi  in the Northern part of the state, GSS  Hong  in the  Central  and the Villanova GSS  for the first  phase of the implementation of the state of emergency on Education sector in Adamawa state. The Governor also  pointed out that  Education is the bedrock for human  development in  any society.

In her remarks, the Honourable Commissioner Ministry of  Education Prof Kaletapwa Farauta  said the  declaration of the state of emergency on Education sector  by the present administration under Governor Bindow is a reality.

Professor Kaletapwa Farauta revealed that  Government  has paid examination fees for  both SSCE  and NECO  for Adamawa  students, stressing that the Ministry of Education  had re- introduced  the planting of Trees  to all the Schools in the state in order to protect the environment  from  degradation and  to safeguard the  climate change.

In his  Vote of thanks, the  Principal of  Villanova Government Secondary School Numan  Mr Linus Fate  thanked  Governor Muhammed Umar Jibrilla for considering  his school  as part of the  developmental  strides of Governor  Bindow administration.

In another development, Governor Muhammed Umar Jibrilla  had layed  foundation stone  for the construction of  Maternity  Complex, Doctors Quarters, Anti-Natal Unit and the  provision of  portable drinking water at the General Hospital Numan.

The Governor also explained that  his Government is determined to  provide  social amenities to the electorates at the grassroots.

During the  ceremony, The Governor also  presented Letters of appointment to some Special Advisers to the Governor from Numan, Demsa and Lamurde  Local Government Areas .He also  assured that his Government will continue to ensure that  citizens of Adamawa state lives better .

The Governor  however thanked the  people of Numan Federation  for the support and  cooperation being given to his administration.

The Numan General Hospital was built in 1922  during the Colonial Era  to provide Health Care delivery to the people of the area.

Also in his remarks, the Honourable Commissioner Ministry of Information and Strategy Comrade Ahmad Ibrahim Sajoh  highlighted some of the remarkable achievements being recorded by the present administration under Governor Muhammed Umar Jibrilla for the past Two Years while in office which includes; the construction of about One Hundred and Twenty Nine Roads across the state, Declaration of State of Emergency on Education and Health sectors, provision of basic social amenities among others  to the electorates of Adamawa state.