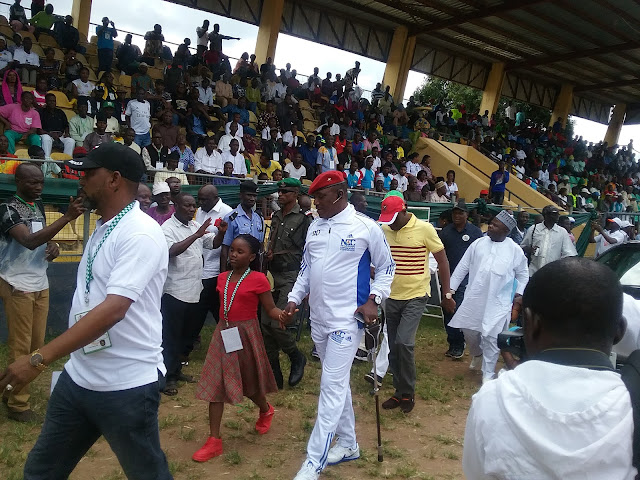 The Next Edition of the National Youth Games will feature only players less than Fifteen years of Age in the fiesta, so as to avoid the outcry that followed the previous three editions especially the last one.

Almost all the Participating states including Adamawa have complained of fielding of over age athletes, biased​ in Screening and officiating and also the sharp practices that engulf the sports festival.

The Minister of Youths and Sports, Barrister Solomon Dalong who made the announcement during the closing ceremony of the third edition of the games held at the University of Illorin, said reducing the age limit to fifteen, is in line with the vision and mission of the present Administration in talent hunt in Sports.

Barr. Dalong said, the set target will also encourage massive youths participation in Sports, avoid cutting corners as well as a platform to discover raw talents that will replace ageing National Players in many of the Sporting events in the Country.

For Engr. Nimrod, the Volley ball federation is ready more than ever before because the policy is in line with the new innovation of Volley ball in Nigeria.

The Executive Director Adamawa State Sports, Council Mr Philip Andrew said it has further challenged them to work harder especially from the Primary Schools and Junior Secondary Schools levels towards achieving the results.

Mr Andrew​ who promised that preparation for the fourth edition which hold by next year in Illorin will commence immediately said the action plan will soon be made known by the sports Council.

Speaking from the Legislative point of view, Chairman Adamawa State House of Assembly Committee on Sports Umar Hammanjoda Farang said all necessary synergy between the Executive and the legislature will be done to achieved results. He stated this in an interview in Illorin during the Youth Games.

It could be recalled that Adamawa State Government approved Three Million Naira for the National Youth Games in Illorin were the state registered over forty athletes in eight games with same number of officials to Illorin.

Adamawa State was placed Twenty five in the overall Medals table after clinching one Gold, one Silver, and one Bronze medal coming from Volleyball male as well as Badminton in both singles and doubles events respectively.

The Team has since returned to the State Capital.