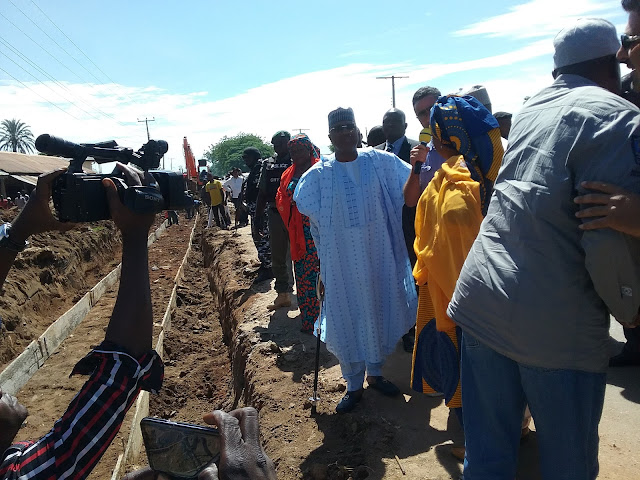 Governor Muhammed Umar Jibrilla has  expressed  satisfaction with the level and Quality of  Work being constructed by Triacta construction company in Ganye Township.
The Governor stated this while  inspecting the ongoing roads construction projects in Ganye  metropolist, said the  projects  being executed was in line with the  campaign promises made to the electorates  and assured that  that his government will continue to  provide Democracy dividends to the Adamawa citizens.
While conducting the Governor round ,the project  Manager of Triacta construction company  Engineer  Habib Jirad  accompanied by the  Commissioner and other officials from the Ministry of  Works  said the 6.6 Kilometers of  Roads infrastructure  in Ganye  Township  would be  completed in the next few weeks.
The  project  Manager  explained that the  major work remains  are the surface dressing and assured  the Governor of quality and  standard of Work.
Governor Muhammed Jibrilla  also  visited  General  Hospital  Ganye  where  he inspected  the  infrastructural  decay at the Hospital ,where the  Governor  assured that the  Hospital  would soon receives  government  attention. He said that  with the declaration of the state of emergency on  Health  sector, Ganye  General Hospital is  going to be  one of the best in the state.
Conducting the Governor round the  Hospital, he Principal  Medical Officer  Doctor  Nabuye Chinedu  have told the Governor that  most the equipment  at the Hospital  were obsolete  and called on government  intervention. 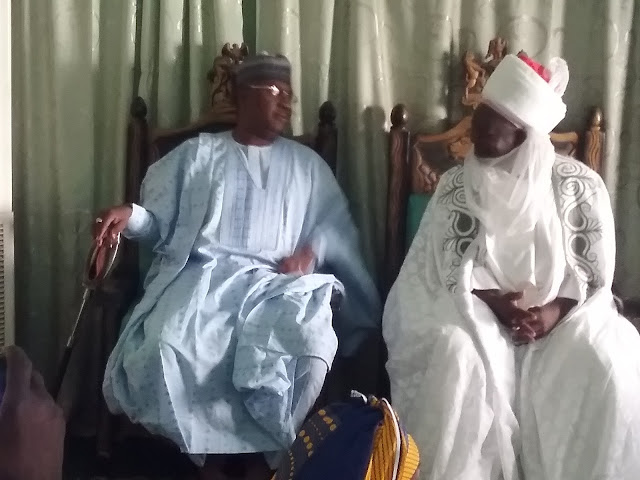 Governor Jibrilla also  paid  a courtesy visit on Gangwari Ganye, His Royal Highness, Alhaji Umaru Adamu Sanda at  his palace where  the Royal father expressed  gratitude  with the  number of  projects  being executed by the present administration under Governor Muhammed Umar Jibrilla  in Ganye Chiefdom.
Meanwhile the people of Jada local government area  would  receives Bindow  Road  construction  train, Inspecting  Jada  Township Roads  to be constructed, the Honourable Commissioner Ministry of Works Barr.Lilian Nabe Kayode  and the Permanent Secretary,  Engineer  Suleiman Muhammed  said  the next  phase  of Road infrastructure  in Ganye  Chiefdom  ,Jada metropolist  would be  giving  priority by the present government under Senator Muhammed Umar Jibrilla.