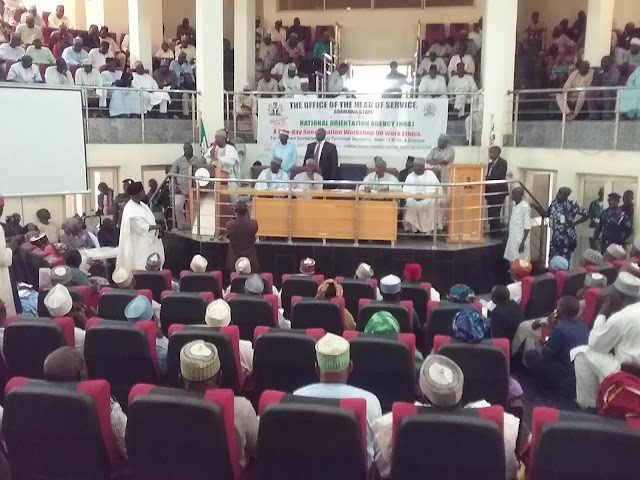 Civil Servants  has been  described as the bedrock for development and  Custodians of  Value  system of any Nation.

Governor Muhammed Umar Jibrilla stated this  while declaring open a One Day  Sensitization  Workshop on  Work Ethics  for Permanent  Secretaries, Deputy  Permanent  Secretaries, Heads of  Ministries, Departments and Agencies and Directors  organised by the office of the Head of Civil service Adamawa state  in Collaboration with  with the  National  Orientation Agency  held at the Admiral  Nyako  Training  Centre,   State  Secretariat complex,  Yola.

Governor Muhammed Jibrilla said  his government is determined to  bring development to the door steps of the electorates of Adamawa state  irrespective of religious or tribal inclinations. 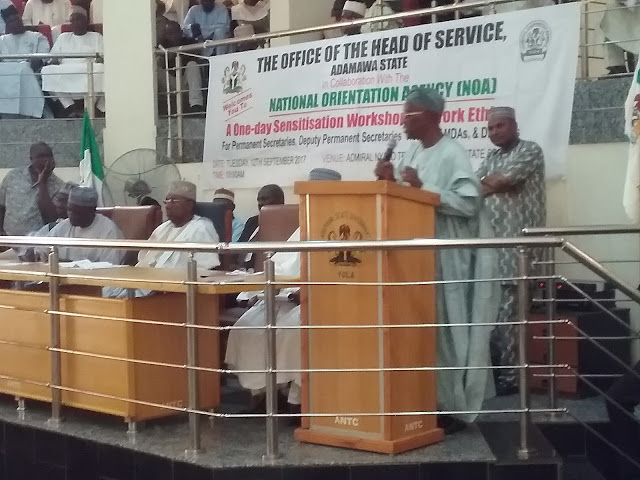 The Governor  appreciated the  support and cooperation being given to his administration by the state Workforce and  appealed to all Civil  servants to  be committed to  their  responsibilities in order to enhance productivity and professionalism to move Adamawa state forward.

Earlier in his opening remarks, the  State  Head of Civil service  Dr Louis Solomon Mandama  said the  Workshop  for top career Civil servants  has come  at the  right time  considering the  various  challenges  faced by the  civil servants.

He also assured that the  Civil servants  would  continue to support the present government under Governor Muhammed Umar Jibrilla  in oder to improve the  living  standards of the people of Adamawa state. 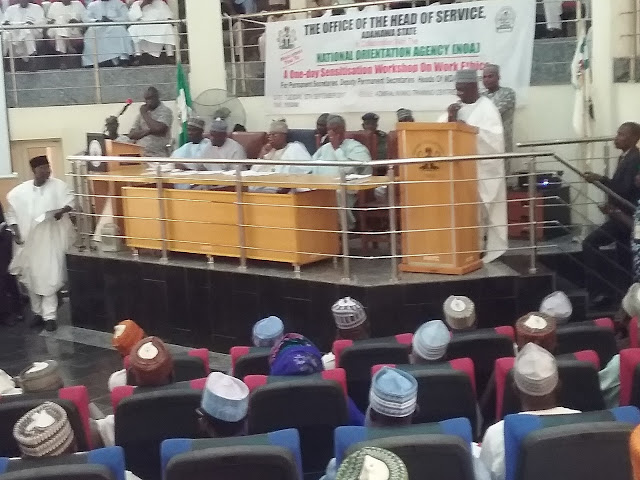 Dr  Louis  Mandama explained that the  workshop is  also to improve the capacity building of Civil  Servants in  order to  improve  their  efficiency and  productivity.

Also in his remarks, the  State Director of the National Orientation Agency Alhaji Ahmed Suyudi  Abba  said the  Civil servants  must have a  character  of delivery  and courage to  changes in the  cause of performing  their duties .

He however  appreciated the efforts of the  office of the  Head of  service for organising  such a workshop  for the career   Civil servants of Adamawa state.