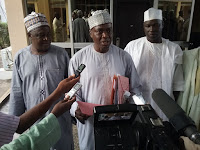 The  present administration under Governor Muhammed Umar Jibrilla is to construct more roads  across Adamawa state.
This was  diaclosed by the Secretary to the State Government Dr Umar Buba Bindir along side Honourable Commissioners of Works Barr.Lilian Stephen, Culture and Tourism  Mr. Tawali'u  Magaji Nathan, and Housing and Urban Development Engr Abubakar Magaji  at the end of the 37th  State Executive Council Meeting  for the Year 2017 presided over by Governor  Jibrilla at the council chambers of the Government House Yola. 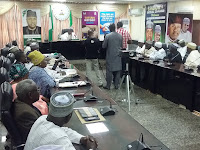 The EXCO also approved for the complete  renovation landscaping of the state Arts council auditorium.
The  Council also approved for the  installation of additional Traffic Lights  across the main roads in the state capital  as well as the  Re-activation of the existing one's.
The  EXCO also discussed and approved for empowering the  Adamawa state Universal Basic Education Board  ( ADSUBEB ) by paying it's  counterparts funding  in order to  implement projects in line with the mandates of the Boardt to support the   Declaration of State of Emergency in the  sector.
The State Executive Council  also discussed on the  reactivation of Agricultural show in order to  encourage  farmers of Adamawa state on food sufficiency in the state.
The Council  however discussed  on the participation of the state in " Nigeria Re-Birth" at labour room a reliality T V show, competition  that would  earned the state  with Two Hundred Million Naira.
12:23
Adamawa Daily Reports
News
Email ThisBlogThis!Share to TwitterShare to Facebook