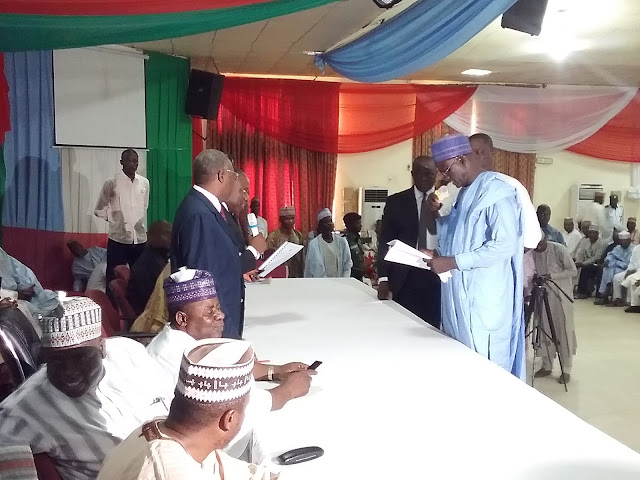 Political Office holders have been  Charged to be loyal and  supportive  to the present government.

Governor Muhammed Umar Jibrilla  gave the charged while presiding over the swearing in Ceremony of Six newly additional Special Advisers  to the Governor held at the Banquet Hall of the Government House Yola.

While  reminding  the newly  appointees to abide by the oath of office taken in the discharge of their official responsibilities, the Governor also called  for Unity Among the people of the state  in order to forge ahead.

He assured that his Administration would continue to provide basic social amenities to the electorates at all times, stated that the cardinal principles of  his government is based on Justice ,Transparency and Accountability.

Governor Muhammed Jibrilla also  pointed out that very soon his government will  focus on  social welfare of the people of Adamawa state, explaining that  so far about Two Hundred and Seventy Eight Roads have been  constructed  and completed  by his administration  in the last Two years while in office  as well as  declaring state of emergency on Education and Health sectors, provision of Agricultural impliments, and maintaining of peace and security. .

In his  goodwill message, the Chief of staff government house Alhaji AbdurRahman Abba Jimeta had called for obsolute  loyalty among the people of the Northern  part of the state.

He revealed that other zones of the state  would  also benefit from  the  appointment of the  Special Advisers and  other key positions  into the present administration of Senator Muhammed Jibrilla.

Responding on behalf of the Special Advisers, Ustaz Jibrilla  Mahmud  Maiha  thanked  Governor Muhammed Umar Jibrilla for seeing the  appointees worthy to serve in his government and promised to abide by the oath of office taken.

The  Oath of office was administered by the state Attorney General and Commissioner for Justice Barr.Bala Silas Sanga.