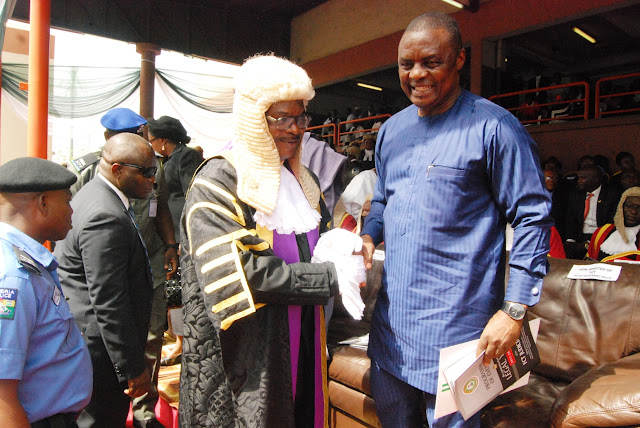 In his determination to stem the menace of vandalism on public facilities in the Federal Capital Territory (FCT), FCT Minister Malam Muhammad Musa Bello has called for the partnership of the FCT Judiciary.

The Minister made this appeal on Monday in Abuja on the occasion of the ceremony marking the commencement of 2017-2018 Legal Year of the FCT High Court of Justice.

His words: “I would like to humbly solicit your hand of fellowship in the strident efforts we are making to improve the infrastructure and provide utilities for the Federal Capital Territory.

“You may wish to however, note that in our drive to achieve these, we encounter serious cases of sabotage through the efforts of hoodlums who are bent on pillaging public utility facilities like electric poles, man hole covers, railways cables and line among others. We would seek your cooperation in the effort to check this menace as these culprits are arrested and brought to face the long arm of the law.”

Malam Bello who was represented at the event by FCT Permanent Secretary, Sir Chinyeaka Ohaa, further remarked that though the country’s democracy is advancing, there are however, still more rooms for improvement.

The Minister also charged the third arm of government to work assiduously on addressing perennial issues such as prison congestion, pressure in courts and delay in the dispensation of justice.

“However, we must acknowledge that Nigeria a democracy is a growing one. Consequently, all the various arms of government are also evolving and this of course, includes the judiciary. We have made significant progress, but we are not yet where we aim to be. Such issues as prison congestion, pressure in courts and the resultant delays in the dispensation of justice are issues which we think  should engage the attention of my lords as we resume the 2017/2018 Legal Year,” he urged.

Malam Bello thumped up the judiciary for rising to its responsibility in the interpretation of law which has helped in providing direction and establishing justice and stability for the overall progress of the system.

Earlier, the Chief Judge of the Federal Capital Territory (FCT) and Chairman FCT Judicial Service Committee, Hon. Justice Ishaq Usman Bello decried the absence of borstal institution within the FCT to cater for the penitentiary needs of children and young persons.

The Chief Judge therefore called on the executive arm of government to as a matter of urgency establish a borstal homes in the Territory.

Justice Bello further affirmed the commitment of the judiciary to ensuring that the nation continues to operate within the ambience of the rule law and protection of the fundamental rights and legitimate aspirations of all its members.