Home » SECURITY » NEWS:N E M A To Provide Relief Materials To The Victims Of Dong and Lawuro Communities.

NEWS:N E M A To Provide Relief Materials To The Victims Of Dong and Lawuro Communities. 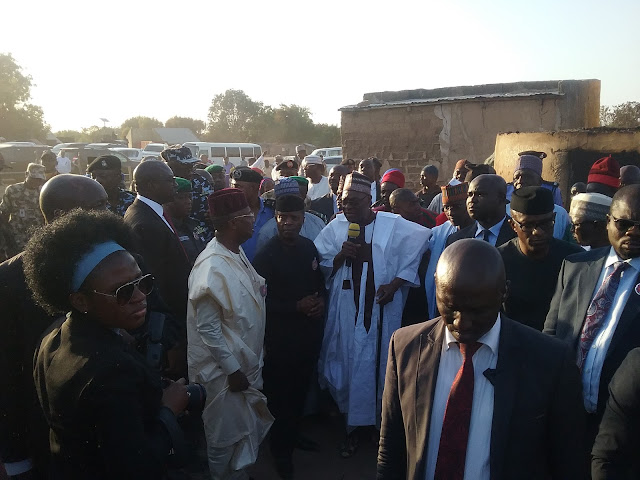 The  National  Emergency  Management Agency  ( NEMA ) has been  directed to provide  relief materials to the victims of the recent attacks on  Dong  and Lawuro Communities of Demsa Local Government Area.

The  Vice President Professor Yemi Osinbajo  who gave the directive  while  inspecting Houses and Market places  destroyed  as a result of reprisals by Herdsmen and communities in  Dong  and Lawuro  Villages.

The  Vice President  urged the communities to  always live in peace and harmony with One another for the overall development of their area and the  Nation at large.

He said that he was in the  area to ascertain the level of destruction done in order to  report  back to President Muhammadu Buhari  immediately and directed  NEMA  to provide relief materials to the affected  communities.

While  expressing  his condolences  to the government and people of Adamawa state over the loss of  lives and properties, he pointed out  that government has  take  necessary measures to  curtailed the future occurance.

He described the  incidence as human  problem  which can be solve humanly,stressing that leadershave a vital role to play  in the  peace Interprises to the  communities. "" The  most important thing is to  ensure that peace and stability  regain  in the affected areas and to find a  lasting solution on the attacks  by both parties.

In his remarks, Governor Muhammed Umar Jibrilla urged Adamawa citizens  to continue to  live in peace and harmony with One another, warning  that government will not condone such barberic and inhuman act.

Governor Muhammed Jibrilla  appealed to the federal government to come to the aids of the victims of the attacks with  relief  materials  in order to cushion the hardship by the  communities.

He explained that  with out peace  no any meaningful development could be achieved  .

The Governor also assured that his government will continue to  protect lives and properties of its citizenry.

On their  parts,Hama Bachama Homun Honest Irimiya Stephen  and Hama Bata Homun Alhamdu Gladson Teneke have condemned the  killings  and attacks on innocent people  and called on the  government to investigate the  circumstances surrounding the  killings  and to prosecute the  perpetrators so as to be a detrance to others.

The  Royal Fathers also  thanked the  Vice president  for the  visit and assured that  such an urgly incidence  in their domains.

About Forty -Five  lives were confirmed death  while properties  worth  millions of Naira  was destroyed  as a result of  attacks in Dong and Lawuro Communities of Demsa Local Government area.