Home » Breaking News » BREAKING NEWS: Governor Bindow Sympathises With the People of Adamawa State Over the Recent Bomb Blast in Mubi and Killings in Numan and Demsa Local Government Areas.

BREAKING NEWS: Governor Bindow Sympathises With the People of Adamawa State Over the Recent Bomb Blast in Mubi and Killings in Numan and Demsa Local Government Areas. 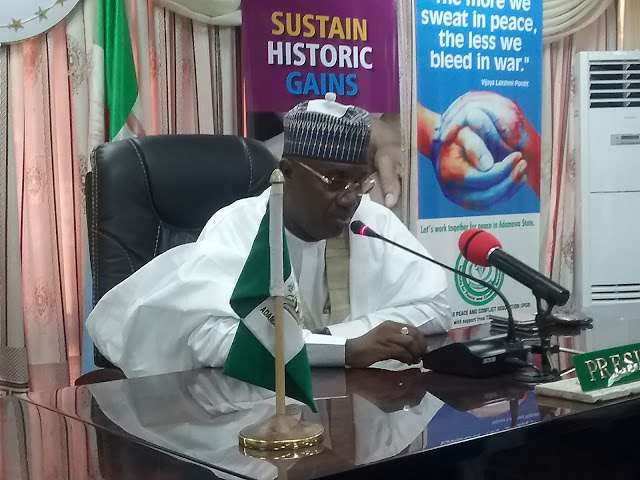 Governor Muhammed Umar  has  expressed  his condolences  and Sympathy  to the people of Adamawa state  over the recent Bomb blast in  Mubi Town and Deaths of  men ,Women, and Children in  Numan and Demsa Local Government Areas of the state.

The Governor made the  statement in a state wide  Broadcast on the recent attacks in some parts of Numan and Demsa.

Governor Muhammed Jibrilla  expressed dismay over the unfortunate incidence, appreciates the  strong sense of grief,  Anger and Sadness over the loss of innocent  lives and wanton destruction of  properties.

He appealed to the  people especially community and Religious  leaders not to aggravate the  situation through Words ,Actions,and Peddling  rumours  and urged them to  avoid taking Laws into  their hands in the name of reprisals but allow government and  security agencies  to carry out their  Lawful duties.

The Governor also assured that Federal  and State Governments will do everything necessary to restore peace and security in the affected areas and throughout the state.

He however said that  it is the  commitment of his government to  ensure that every law abiding citizens  or residents of Adamawa state entitled to security regardless of Tribal, Religious  or Political inclinations.

According to Governor Jibrilla, in order to fish out and punish the  perpetrators  of the recent  killings as well as proffer a lasting solution to the  crisis, Government has set up a high powered  administrative panel  that will soon be inaugurated, pointing out that security  is not for Government alone  but to every one's  responsibility.

The Governor Muhammed Umar Jibrilla  also  appealed to the  people of the state to ensure that Adamawa state  remains united, Peaceful and Secured.

Governor Jibrilla warned trouble  makers that Government will  deal with them decisively, he then appealed to  citizens to embrace  peace, solidarity and  concern to each other in line with the  Teachings of both Religious.