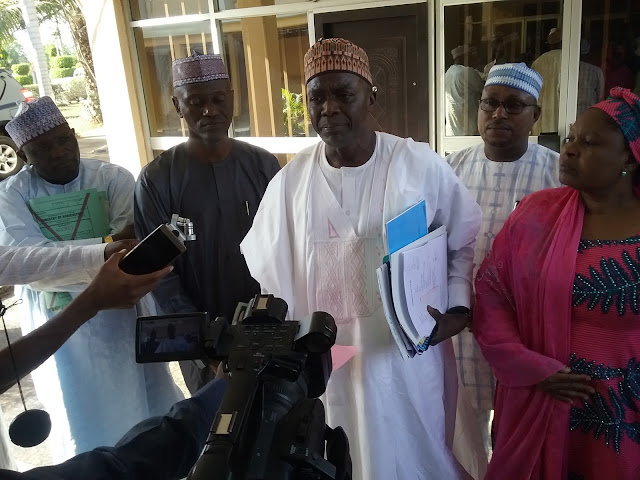 The Adamawa state Government has proposed  the sum of Ten Billion Naira as Supplimentary Budget for the 2017 fiscal year in order to accommodate  and appropriate  the resources  from the Paris club fund  deployed to the state.

This was disclosed by the Secretary to the State Government Dr Umar Buba Bindir along side  other Honourable Commissioners  who briefed Journalists at the end of the Forty-two Weekly  State Executive Council Meeting presided over by Governor Muhammed Umar Jibrilla  at the council chambers of the Government House Yola.

He explained that the EXCO has considered  the Supplimentary  Budget as submitted by Honourable Commissioner Ministry of Finance and Budget,  Hon.  Mamood Sali Yunusa for the betterment of the people of Adamawa state.

Dr Umar Bindir  said that the Counsil also discussed and  considered  a medium term expenditure framework as presented by the State  Fiscal Responsibility Commission to demonstrate for the year 2018,2019 ,and 2020 .

According to the SSG, the Council also  approves  on the improvement and renovation of the state  headquarters of the Local Government staff Pension Board .

He also explained that the EXCO had discussed  on the security Situations in the state, stressing that the  council  had evolved  measures  and steps regarding security and  peaceful coexistence to the people of Adamawa state.

Dr Umar Bindir debunked the  rumours that  some members of the state executive council switched  to another party, which he described as untrue as reported by the  social media.

He also said that the Council has  received a presentation and Signing of Memorandum of Understanding on Kiri  Dam  Electrification project between Adamawa state Government and P P P consortium to produce  about  Thirty Mega Watts of electricity from the Dam as well as to manufacture Electric  cables and Wires  in the state.

The  Secretary to the State Government  further  explained that the EXCO has discussed on the  improvement  and Beautification  of the state  capital by giving  it a new out look, stressing that  government is committed to  bring modernisation to stay in Adamawa state.