Home » » Unlabelled » NEWS: Over 2b has been earmarked for Women and Youths empowerment in Adamawa-SSA

NEWS: Over 2b has been earmarked for Women and Youths empowerment in Adamawa-SSA 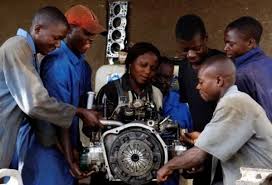 A Senior special Assistant (SSA) to the Governor of Adamawa State on poverty alleviation and wealth creation , Alhaji Ayuba Audu said that the administration of Senator Muhammadu Umaru Jibrilla Bindow has earmarked over 2 billion Naira for youths and women empowerment in the state.

According to him the essence is to consolidate the 2018 budget which was tagged "budget of hope and empowerment " where it can productively engage the youths in the state into meaningful and productive business ventures to reduce the rate of poverty scourge.

Ayuba Who is also the coordinator of poverty alleviation and wealth creation programme of the state told our correspondent that 2017 under the administration of Jibrilla Bindow trained over 10,000 youths into various skills acquisition, empowered them with self reliance business knowledge.

"As you are all aware Senator Muhammadu Umaru Jibrila Bindow is a performing Governor in the area of infrastructural development,health and education sector where he declared a state of emergency in the two sectors, this years is going to perform more in the area of human empowerment and development as he earmarked over 2 billion Naira to empower our youths in the state." Ayuba said

He however refutes rumours of given forms on free loans, but exposed that the forms being given to beneficiaries are N-Power loans in form of grands to youths that are into small and medium enterprise (SMEs) and is a free interest loan payable within a stipulated time.

He further said that the idea is to properly engage the youths to be more productive and hard work as is not a free monthly allowance as it use to be.

According to him the wisdom is to engage youths around the 226 political units of the state to help in sanitizing their communities, cleaning all the water ways blockages,clearing all the refused dumps while some are to help in securing the peace and harmony of the state that has been distorted by Boko Haram insurgents.
04:13
Adamawa Daily Reports
Email ThisBlogThis!Share to TwitterShare to Facebook