Home » News » NEWS:Education Sector Would be Given Desired Attention by the Government, Says Governor Bindow.

NEWS:Education Sector Would be Given Desired Attention by the Government, Says Governor Bindow.

Governor Muhammed Umar Jibrilla has  described Education  as the bedrock of development  for  any society.

The Governor stated this when he granted in audience members of the  Nigeria  Union of Teachers Adamawa state  chapter who paid him a courtesy visit at Government House Yola recently.

According to Governor Muhammed Jibrilla,  his government will  comprise  everything for Education, explaining that  already his administration has declared a state of emergency on Education sector and assured that  Teachers  priority is going to be the top most area  and solicited for the support and cooperation of the  NUT in order to move  Adamawa state forward.

Earlier in his speech, the State  Chairman of the  Nigeria  Union of Teachers Comrade  Rodney Nathan told  the Governor that  members of the  Union  were at Government House in support and  solidarity  to the present administration  under the leadership of  Senator Muhammed Umar Jibrilla  for giving  education  the desired attention  by declaring a state of emergency on Educational sector.

Comrade  Rodney Nathan called on the government to  look into the promotion of Teachers and  pleaded the Governor  to revisit the retirement age  of Teachers in the state from 60 to 65 years and 40 years instead of 35 years respectively .

He also  called on the government to provide  the required Training to Teachers  in order to give standard and  Qualitative knowledge to Adamawa  children.

In a related development, the Old Students of Government Teachers College Yola have commended Governor Muhammed Jibrilla for his giant strides in  reviving Teachers Colleges in Adamawa state.

The  President of the Association  Comrade Rodney Nathan stated this when members of the  association paid a courtesy call on Governor Muhammed Jibrilla  at Government House, explained that the  group had identifies with the laudable achievements of the present administration  in area of Education.

Comrade Rodney Nathan  said the association is a partner in progress of the state, explained that the  recent  decision taken by the  government to  allocate  part of the  school  for  expansion of Federal Medical Center Yola is a welcome development, stressing that  it is aimed at the  overall benefit of the people of the state.

He also  appealed for the construction of the  road leading to the college, pointing out that  efforts  have been intensified to provide sporting facilities  in the  College.

While responding Governor Muhammed Jibrilla said his administration intends to change the narrative of the state and assured that  he will support the  school and will construct a befitting road to the college.

The Governor however called on the people of the Adamawa  to be united for the overall development of the state. " Let's join hands together  in developing Adamawa state, We don't have  any other  states  apart from Adamawa " he added. 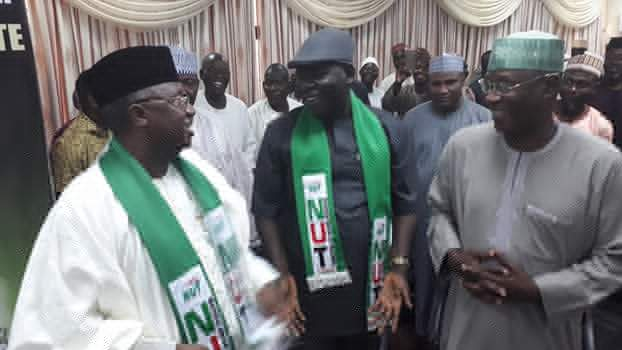