Home » news update » NEWS UPDATE: Female Traditional Title Holders, Women Leaders, Wives of Traditional and Religious Leaders Meets on the Implementation of UNSCR 1325, and Passage of the Equal Opportunities Bill in the State.

NEWS UPDATE: Female Traditional Title Holders, Women Leaders, Wives of Traditional and Religious Leaders Meets on the Implementation of UNSCR 1325, and Passage of the Equal Opportunities Bill in the State.

History was made in Adamawa on 19th July, 2018, when Female Traditional Title Holders, Wives of both Traditional and Religious leaders met at a Capacity Building Workshop organized by the State Ministry of Women Affairs and Social Development (SMWA&SD), UN Women, Search for Common Grounds, and other Partners at Wetlands Parks Yola to these women leaders on UNSCR 1325, and on the contents of the Adamawa Equal Opportunities Bill, in order to build a critical mass of strategically placed women, advocating for the passage of the proposed GEOB Bill, which His Excellency, the Executive Governor had promised to present to the  Legislature, as an Executive Bill. Wednesday 19th July, 2018.

In a Key Note address by the Permanent Secretary (SMWA&SD) Hajiya Maisaratu Bello, Zinariyan Jimeta, she said that the gathering is the first of its kind in the history of the State. She said that “My fellow women, we are gathered here to discuss issues that affect us as women, wives and mothers. God has honoured some of us by giving us titles and responsibilities, to bring peace, and peaceful coexistence in our communities; let’s use it to the benefit of our children and our communities”.

The Zinariya emphasized on the need for early warning and early reporting of conflicts and sexual and gender based violence (SGBV), perpetrated against women and girls to the relevant authorities for necessary action.

Additionally, she called on the Wives of Traditional Rulers and Wives Religious Leaders Wives to use their position in their various communities, and places of worship to pursue and promote peace by all possible means. She also admonished them, to report any issue threatening the existence of peace so that at the end of the day, Adamawa Women can raise their heads high and say “Yes! We fought for peace in our State, this is our stand and we want everybody to listen to our voices”.

Similarly, the Gender Technical Adviser, (GTA) of UN Women in the State, Dr. Titus Orngu made a presentation on the objectives of the programme which includes; to deepen the knowledge of Adamawa Women on the contents of the proposed Adamawa Equal Opportunities Law, to enhance understanding of Women leaders on United Nations Security Council Resolution (UNHCR) 1325, and to solicit the support of Adamawa Women for the passage of the proposed Adamawa Equal Opportunities Law, for the enhanced protection of women, girls, and children in the state.

He said the WPS is ongoing on in three states; Adamawa, Gombe and Plateau. Here in Adamawa, only 4 LGAs have been selected and these included: Maiha, Mubi South, Numan, and Yola Norh LGAs – and in addition, project activities have been extended to Mubi North, Demsa and Yola South LGAs. Further, the GTA also mentioned that, since what affects women in these LGAs can affect every woman in the state, it means that the Programme is for the entire state.

More so, he explained that all the key Stakeholders – including leadership of Muslim Council, Christian Association of Nigeria, FOMWAN, WOWICAN, government MDAs, traditional leaders, NCWS, Widows Council, people with disability, the media, etc. have either been trained, contacted or informed on the proposed gender bill and all have given their consent but the big question was; why is the Bill not passed into Law yet? He encouraged them to use their positions to ensure that the rights of women and children were protected, promoted, and preserved in Adamawa.

In a Good will message by the representative of the wife of Lamido of Adamawa, Hajiya Aishatu Barkindo, the Sarauniyan Shagarta, she that Women are the owners of their homes, children as well as their husbands. She urged women to unite and give peace a chance. “Our parents left a legacy for us, what legacy are we living for our children”? She rhetorically asked.

Others that delivered their good will messages included; Women Title Holders, Wives Bishops, Wives of Imams, Wives of Pastors, Wives of Wards Heads, etc.
After presentations on the Women Peace & Security Program; the provision and contents of UNSCR 1325, and Contents of the proposed Equal Opportunities Bill, the following questions were asked;
I am hearing this for the first time about the Bill, how can I know the content.
I know that Nigeria has a problem of implementation, what can we do to enhance the implementation of the bill?
What is Sexual Assault and where is the Center for any referral cases in Yola or focal point. People from Michika if it happens what do we do?
I have been attending this workshop and it was said the bill will be passed what happened that it is still pending?
These concerns were addressed accordingly.

Thereafter, during the group work session, the following were some of the strategies and activities the women leaders developed and promised to carry out for enhanced sensitization and passage of the proposed equal opportunities law by the Legislature, in order to protect all women and girls in the state;

Creating awareness to our husband and children and down to the community level
Sensitization to other women on UNSCR 1325, the law and reporting violence;
Enlightenment through media house, especially radio;
House to House sensitization to neighbors to love each other;
Advocacy & Sensitization of Religion and Traditional rulers on passage of the law;
Community dialogue in churches and mosques on peaceful co-existence;
Peace Talk between religious groups for peaceful co-existence in communities;
Sensitization on discrimination in work place, schools, create peace club in schools.
Sensitization on discrimination against women in communities and at all levels.
WhatsApp group or social media sensitization;
Creating Penalty Group in our communities to deal with perpetrators of rape.

There were 132 persons in attendance. 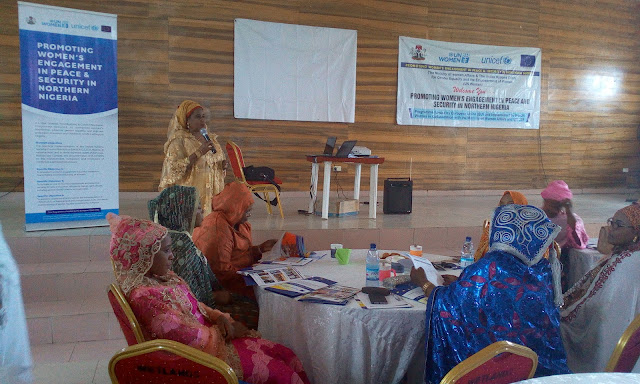